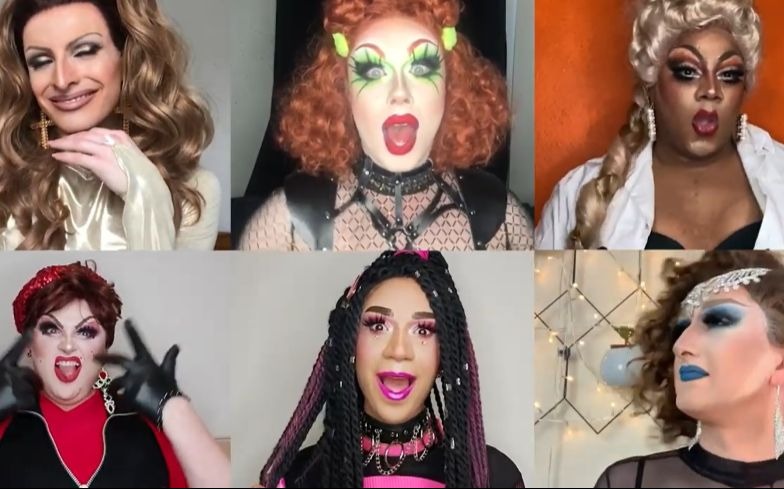 The queens performed the hit song Six from the musical Six.

What do you get when you cross six theatre-obsessed drag queens, the House Party app, and the hit musical Six? Not only do you get the most ambitious crossover since Avengers: Endgame, but you also get one of the most SIXening lip-syncs out there.

Explaining the reasons behind the video, Vinegar explained to GAY TIMES: “Me and some of the girls were having a little chat on an app called House Party, and I was looking at it and I was like ‘Hang on, you can get six girls on this app’ and it looks like a really cheap music video.

“I had the lightbulb moment when I was having a wee, and I went ‘Oh my god, why don’t we do Six, but make a full music video moment out of it?’ so I threw the idea out to the girls and they were like ‘Oh my god, yes, let’s do it.’

“It literally came from that, the fact that we were all bored and we wanted to do something fun and creative and put something out there on social media that everyone can enjoy and watch and share and bring back the power and magic of musical theatre through everyone’s phones.”

Vinegar added: “We are all obsessed with Six, we love Six, I’ve got friends in Six. Courtney Bowman, who was in Everybody’s Talking About Jamie with me, so big support to musical theatre.

“This is our support for the industry and keeping musical theatre alive as it’s so important.”

Their performance has gone down a treat online, with one fan writing: “Absolutely livingggggg for this.” Another added: “THIS IS EVERYTHING!!! I LOVE IT.”

Six is a modern day retelling of the story about King Henry VIII’s six wives. The wives are reimagined as a pop group, deciding who should be their lead singer. Each of the women sing about their lives and how they suffered when they were with Henry, with the one suffering the most becoming the group’s lead singer.

You can watch the queen’s performance here or below.

This release isn’t the only thing Vinegar has been up to during this lockdown as she also launched her own cooking series, Vinegar’s Lockdown Kitchen.

In the show’s debut episode, the star shares her secret recipe for… porridge. “I am telling you now, if you are not a porridge fan, make porridge with this method and I promise ya, you’ll be a porridge fan,” she assures.

With quotes such as, “We are quarantinaturner”, “Being self-isolated is all about two things: good food and good dick” and “Bash that shit up!”, Vinegar’s Lockdown Kitchen is a must-watch for quarantined queers who aren’t skilled with food.