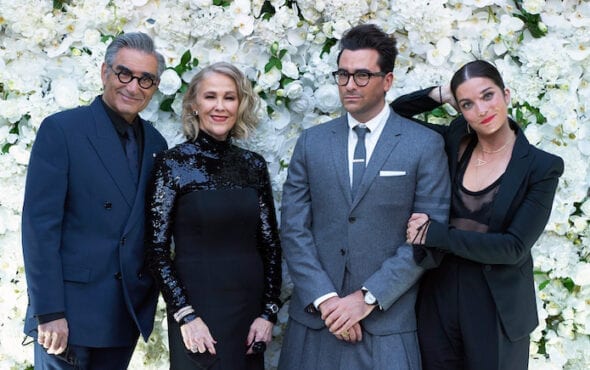 The beloved Canadian sitcom, which came to an end with its sixth season earlier this year, won nine awards in total – breaking the record for most wins in a single season for a comedy.

“This tent’s on fire,” he said as he picked up the award for the latter.

“Writers don’t get awards, what is this?! First of all, I just want to say thank you to my dad for giving me the reigns to this show even though I didn’t have any experience in a writer’s room, even though saying that out loud right now sounds like a wild choice on your part.”

Schitt’s Creek also won the coveted award for Outstanding Comedy Series, beating stiff competition from Curb Your Enthusiasm, Dead to Me, The Good Place, Insecure, The Kominsky Method, The Marvelous Mrs. Maisel and What We Do in the Shadows.

Dan made a political plea to viewers as he and Eugene accepted the award.

“Our show at its core is about the transformational effects of love and acceptance and that is something that we need more of now than we’ve ever needed before,” he passionately stated.

“I just wanted to say for any of you who have not registered to vote, please do so and then go out and vote because that is the only way we are going to have some love and acceptance out there.”

Eugene thanked his son for creating a series about “inclusivity, a castigation of homophobia, and a declaration of the power of love.”

What the actual fuck! https://t.co/Teyx3ZS0g0

What he said. x https://t.co/hYPPGSGnWq

“A special note to the viewer. Kiddo, I know how you feel right now, just know that you are loved and don’t give up on love. Believe in love and the power of love, okay? Thank you so much.”

The series won an additional four awards, the most it has ever won in a single year, bringing its total number of Emmy wins to 19.

Zendaya became the youngest person to win Outstanding Lead Actress in a Drama Series for her performance as Rue Bennett, a teenage drug addict, in HBO’s critically-acclaimed drama series Euphoria.

For the full list of winners at the 72nd Primetime Emmy Awards, visit here.