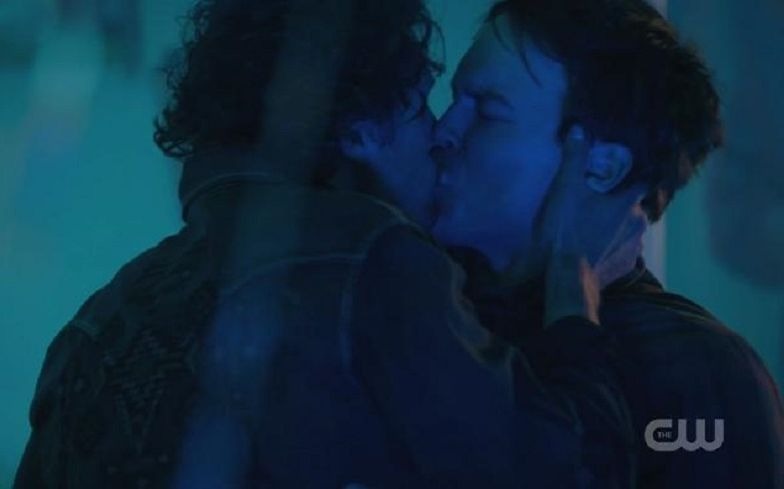 The pilot’s same-sex kiss was nearly cut for time constraints.

Roswell, New Mexico has been providing LGBTQ+ representation since it began airing last year, with the relationship between soldier Alex Manes and alien drifter Michael Vlamis.

However, speaking to Digital Spy, showrunner Carina Adly MacKenzie said she had to battle to keep the ‘Malex’ kiss in the pilot, as the CW suggested she move it to the next episode due to time constraints.

“There was only one time when there was a little bit of pushback… our pilot was really long. Like four minutes too long,” Carina explained. “One of the suggestions that came through was: ‘OK, well, maybe we cut Michael and Alex’s kiss, and we put it in the next episode?’

“And I said no. Because I felt like it really needed to be very clear in the very first episode who these men are, and what they are to each other.”

Emphasising the importance of same-sex love stories, she said: “I don’t look at Alex and Michael’s love story as any less important than Max and Liz’s love story when I’m telling the story.”

Carina also told the publication she could introduce more LGBTQ+ characters but confessed there were some difficulties, explaining: “I’m always raring to see more queer characters on TV. But I was seeing things that reflected a reality that I don’t know — a reality that I think is a little bit idealistic, as far as what the world looks like right now.

“I think a lot of people look at Gen Z as this post-homophobia generation, and I don’t know if that is realistic, especially in small towns in the middle of the country.

“So we wanted to take a look at a lot of different experiences of discovering your sexuality on this show. And I think that Alex’s story, with his father, and Michael’s story with his family, it’s not the only story to tell.”

Roswell, New Mexico currently airs on the CW in the United States, and the first season will begin airing in the United Kingdom on ITV2 on Monday (22 June) at 8pm.