Robin has come out as bisexual in new Batman DC comic 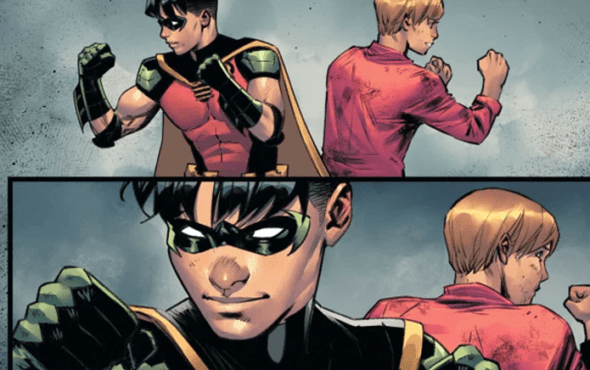 Batman’s infamous sidekick Tim Drake, aka Robin, has come out as bisexual in DC’s latest issue of Batman: Urban Legends.

Robin has been a long-standing fixture in the DC universe and the character has faced multiple iterations since his comic debut almost 80 years ago.

The new comic picked up where it left off with Drake rescuing an old friend, Bernard, who is captured and almost sacrificed by villains.

The pair, previously agree to have dinner together, but have their plans interrupted by the Chaos Monster.

During the enthralling fight, Drake is faced with pressing thoughts that “something out in the ether has been taunting” him.

Drake realises he is unsure of where he stands when others have asked what he wants as he could “never grasp” what the answer was.

The panel in the comic, shows Boy Wonder undergoing self-discovery: “Ever have a lightbulb moment?” Drake questions. “Like something out in the ether has been taunting you, teasing you. Like you know you’re supposed to be on the same page as your brain but not everything made sense. People keep asking me what I want. But I couldn’t grasp it. Whatever it was. It always felt just out of reach. Until now. Until right now.”

After the big fight, Drake visits Bernard at his house explaining he would like to “figure” out their relationship.

The crime-fighter is suddenly asked out on a date, by Bernard, which he accepts, saying: “Yeah, I think I want that.”

“I wanted to pay tribute to the fact that sexuality is a journey,” Fitzmartin said. “To be clear, his feelings for Stephanie have been/are 100% real, as are his feelings for Bernard. However, Tim is still figuring himself out. I don’t think he has the language for it all … yet.”

The DC Comics writer added: “I fully sat on the floor of my apartment for a solid two minutes in happiness as it sunk in … I hope it is as meaningful for others as it has been for me.”

Fans and readers online have celebrated the news of Drake coming out as bi in the latest issue of Urban Legends.

TIM DRAKE OFFICIALLY BEING CONFIRMED TO BE BI (ITS CANON IDC) pic.twitter.com/8bXF85VZaO

I know most of y’all don’t follow comics but Tim Drake (aka Robin in Batman) just came out as bi and no i’m not crying, I promise pic.twitter.com/ef43sjsBDO

My favorite superhero Robin (yes I know there are many)
Is now bi in the comics. Niiice!#TimDrake #dccomics #Robin pic.twitter.com/QwRHgHYWkm