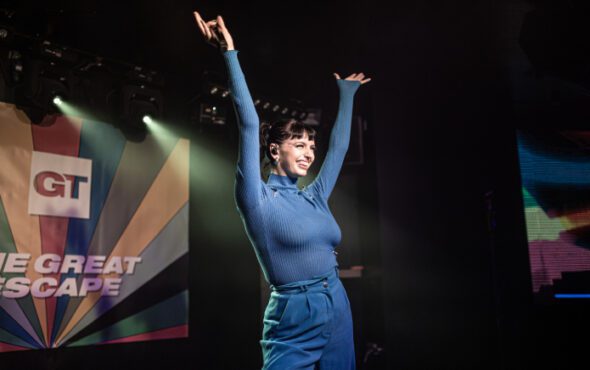 Rebecca Black closed GAY TIMES’ first-ever stage at The Great Escape with a collection of her most beloved pop bangers.

Following rousing sets from NOAHFINNCE, Claudia Valentina and Mickey Callisto, the 24-year-old singer-songwriter – accompanied by a jewel-encrusted chainsaw – sent fans into a pop frenzy as she performed anthems such as Girlfriend and Read My Mind, as well as a cover of La Roux’s number one hit Bulletproof.

Rebecca concluded her set with a performance of her viral smasher Friday – the 2021 hyperpop remixed version featuring 3OH!3, Big Freedia and Dorian Electra.

All four stars performed at Club Revenge on 13 May, Brighton’s most well known queer venue. The Great Escape is a three-day music festival that takes place in Brighton and Hove every May.

It exists to showcase more than 450 up-and-coming artists from across the world by taking over 35 walk-able venues across the region, with this year’s celebrations having a special focus on LGBTQ+ talent through its partnership with GAY TIMES.

“Music has given us some of our greatest LGBTQ+ icons, which is why GAY TIMES remains committed to supporting the queer superstars of tomorrow,” said Lewis Corner, Editorial Director of GAY TIMES. “As the UK’s best music festival for discovering emerging talent, we are delighted to be partnering with The Great Escape on their first ever dedicated LGBTQ+ stage with some exciting new music acts. Grab your passes and come along to see first-hand the LGBTQ+ icons of the future.”

Ahead of the festival, Rebecca told GAY TIMES that her European tour and set at The Great Escape is the “most” she’s pushed herself throughout her decade-long career.

“Being able to do my own show – and it’s a part of my first headline tour this year – I’ve learned so much about what is important to me within the show,” she explained. “I’m someone who goes to shows so many times, and I’m such a big fan of the live music experience.” Last year, Rebecca defied all expectations of her artistry with the release of her EP, Rebecca Black Was Here. The six-track collection saw Rebecca explore a hyperpop sound, which was met with acclaim from fans and critics.

The star said the EP felt like a “launching point” for her to explore her version of “the multiverse,” adding: “Now I finally feel like I can do this, and I’ve proven to myself that I can do this, where do we go from there? And now I’ve introduced myself as a queer artist, where we do we go from here?”

Rebecca will release her long-awaited debut album this year, which she revealed is a “lot more introspective” than Rebecca Black Was Here.

“It has more to do with me and my perspective on myself more than trying to blame so much on the other person,” she admitted. “That being said, I’m not a perfect human. That’s what is to be expected and, sound wise… I think it will continue to surprise people in hopefully a positive way.”