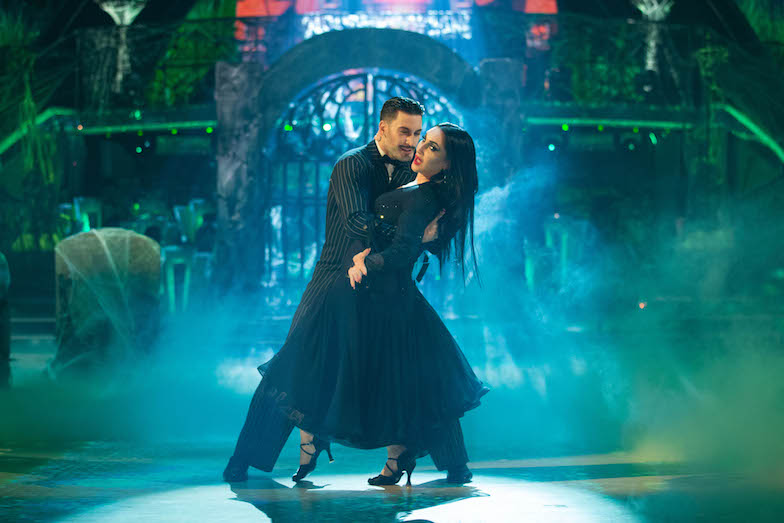 Michelle Visage topped the leaderboard on a night of great dances.

Halloween Week is one of the most highly anticipated weeks on Strictly Come Dancing. We get all of our spooky playlists played and the hair and make-up team really outdo themselves with incredible creations.

And of course, there is always some form of supernatural success or chaos on the dance floor. And in a night with high performances, Michelle Visage slayed the competition, Alex Scott stayed in a high place on the leaderboard and Karim Zeroual slipped down after mixed, and completely incorrect, reviews.

Last week, we saw a sense of normality return to the Strictly ballroom with David James returning to the bottom of the leaderboard, before being eliminated by Mike Bushell. Shock eliminations, like Dev’s, usually result in a fair elimination the next week, but could we be in for another shocker on the dance floor?

Although the main talking point from last week should remain how Johannes Radebe slayed the Strictly catwalk in a pair of three-inch heels. He gave the power, the amazement, and the ooh ah ah sensation that we want from a Strictly pro routine. The fact he wasn’t given a partner last year is a sin that should never be forgiven, and if he doesn’t have one next year, complaints will be made.

And for the first time this year, in our Strictly poll, Michelle Visage did not top it. Instead, Karim Zeroual’s salsa was the top dance of the evening, scoring 40% of the vote. Michelle was, however, in second place with 20% of the vote. And there was another big spread among the remaining dancers, with Alex Scott, Emma Barton, Saffron Barker and Will Bayley all receiving 10% of the vote.

And if you follow the link here, you can once again vote for your favourite celeb routine from last night.

Unfortunately, before the start of the show there was some news about some dances. Will Bayley was injured during a rehearsal and was unable to dance, and Neil Jones also had an injury, leading to Kevin Clifton dancing with Alex Scott.

But it was Emma Barton who opened the show, and even though I loved her dance last week and thought the judges were wrong, this week I agreed. The tango is a great dance, but I wasn’t sensing any of the drive or aggression that makes it so captivating to watch. However, out of all the dances, they had the best costumes, theming and make-up.

Will Bayley would’ve been next, but was forced out due to an injury. Hopefully he’ll recover in time for next week. So the next dance was Emma Weymouth, and again I wasn’t feeling it. The swivel seemed missing, and it felt like Emma spent too much time in the air, and not on the ground.

Chris Ramsey was also another non-starter to the evening. However, even though the technique was missing, I can’t deny that this was one that put a smile on my face. Sadly, Karen forgot the golden rule of wig reveals, have something to show us, gurl!

Saffron Barker did, however, then deliver the first good dance of the evening. But even though it was enjoyable, funnily enough the most entertaining part of the dance were the little magic touches like flashes of sparks or Craig’s 10 paddle making an appearance. Like that would ever happen though.

Unfortunately, we then back into mediocrity with a stiff and ploddy tango from Mike Bushell. I can’t deny the armography in the middle was pretty good, but the 7s given should’ve been 5s. But we then went from overmarking to undermarking with Karim Zeroual. There were plenty of paso moves in his Stranger Things inspired routine and it was truly the first dance of the evening I wanted to vote for. Bruno spoke the most sense while the others critiqued.

Meanwhile, Johannes Radebe continues to be the icon we deserve with a Cha-Cha-Cha to the Steps song Scared of the Dark. I don’t care if Catherine didn’t have the technique, she sold the dance to me, and Johannes continues to be this year’s most watchable pro.

And to top off a good routine, judge’s scores aside, we were then treated to Michelle Visage as Morticia Addams. When she was Liza Minnelli, she slayed, and now she’s Mrs Addams, well guess what? She’s slaying again. She moved with such serene grace over the dance floor, it was impossible to tear your eyes away from her, and her and Giovanni’s characterisations were near perfect. I’ve disagreed with quite a few 10s this series, but I cant’ say that this one didn’t deserve it.

And although it didn’t get 10s, Kelvin Fletcher’s tango was another sensational routine following Michelle’s and it managed to keep in line with the high bar she’d set. And to top off this spooky night of dancing, it was Alex Scott. A lot of fans online would’ve preferred to have seen back-up pro Gorka dance alongside her, and it would’ve partly fulfilled our mostly incorrect predictions for the series, but she was partnered with Kevin, and it was another great routine. I was worried Alex’s Charleston last week might be a one-off, but she could really be here to stay now.

It was the final three dances that all topped the leaderboard with Michelle on 39, Kelvin on 36 and Alex on 34. Making their ways to the bottom of the leaderboard were Chris on 23, Catherine on 24 and Mike on 26.

As much as I like him, Chris could struggle to make it through to next week, but Catherine and Mike are hardly in great positions, and Mike has already been in the dance-off once before, so he could be making his way there again. But again, like last week, people scoring less than 30 like Emma B or Karim might also be in a bit of danger.

Given how sensational it was, we can’t not leave you without a way to watch Michelle’s dance, so you can either watch it below or follow this link. And by either watching below or following this link, you can watch Karim’s paso doble, and tell us whether you think it was a 29 or not. And let us know what your favourite routine of the night was by voting in our poll here.

Strictly’s next live show is next Saturday (2 November) at 19:00 on BBC One. And if you still need Strictly magic in your life Strictly: It Takes Two will be on every weekday at 18:30 pm on BBC Two, and 18:00 on Friday.