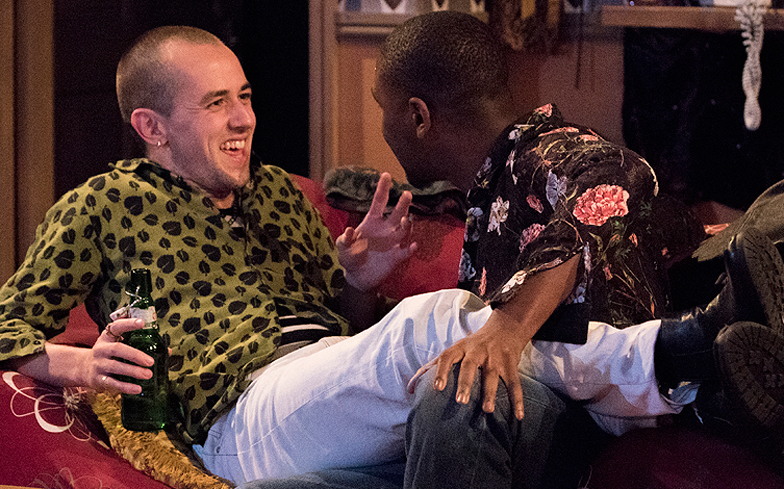 Following on from their summer production of Beautiful Thing, Above the Stag Theatre continue their Jonathan Harvey retrospective with this sumptuous production of his 1995 play.

This tale of two brothers – one gay, one straight – is utterly absorbing. Harvey’s words have withstood the test of time, and his writing remains as relevant as ever. His status as one of the preeminent and most influential voices in queer theatre is quite rightly being honoured by this season of his work at Above the Stag Theatre – the UK’s only LGBT dedicated performance space.

The action here takes place in Shaun’s apartment on Rupert Street in London, and focuses on his relationship with his gay brother Marti. Alongside comings and goings from neighbours George and Clarine, and drag-queen pal Dean, there are long-simmering resentments to resole – and skeletons to be firmly shaken out from the closet. The script zips along, and pacy direction from Steven Dexter ensures that this is a piece that totally engross the audience and immerses them in its world until the (bitter) end.

Tom Whittaker’s performance as Shaun – all angst and sinew – is superb. We experience every moment of his painful journey in high-def detail – remorse for a violent violent reaction to his brother’s coming-out is brutal with its honesty. Hal Geller as Marti is equally captivating – a ‘bitter queen’ who covers his disappointment and resentments with camp humour and bitchy quips. Geller perfectly captures a certain type of gay man who believes that he’s over-the-hill at thirty. There’s a sympathy and a connection between the two performers that makes for an uncommonly believable representation of a fraternal relationship.

Amy Dunn gives a show-stealing turn as George – the downstairs neighbour who – as with most the characters on display here – is in desperate need of company other than herself. Dunn is unforgettably hilarious as  ‘the square’ –  keeping a straight face as she wields wit like a rapier. Seriously superb stuff. From the apartment above comes mentally-ill Clarine – played with finely-judged sympathy by the hypnotically brilliant Phoebe Vigor. And Myles Devonté impresses with an almost dual role – shimmering and sparkling as Marti’s drag-queen party friend, and then, when the make-up comes off, grounding the piece as Dean – the more down-to-earth alter-ego.

The Independent’s review of the original 1995 production said of the climactic moments: ‘Rupert Street Lonely Hearts Club contains one of the most gut-wrenching love scenes between two men ever put on stage.’ And that holds true to this day. With twists and turns that constantly surprise and shock, this is gripping queer theatre from a master of the art. Highly recommended.