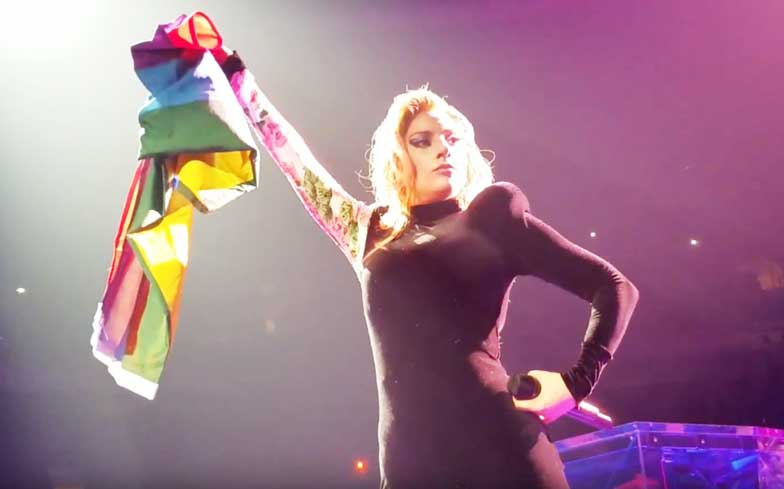 Lady Gaga was among the celebrities who gave speeches.

Lady Gaga has delivered an empowering speech to commemorate Stonewall Day. The Stonewall Riots happened on June 28, 1969, and the event was held as part of the 50 year anniversary.

Speaking to a crowd, Lady Gaga said: “This community has fought and continued to fight a war of acceptance, a war of tolerance and the most relentless bravery. You are the definition of courage.

“I may not, to some people, be considered a part of this community, even though I like girls sometimes. I would never degrade the fight you have endured. You have the power. You are so, so powerful, and I hope you feel that power today.”

Gaga also referenced how attacks on transgender people were increasing. “It is said that those who threw the first brick on that historic night were members of the trans community,” she said.

“We find ourselves also at a time when attacks against the trans community are at unacceptable levels. I will not tolerate this, and guess what? I know neither will you.” Conchita called for more LGBTQ spaces, saying: “Stonewall is the ultimate symbol of a safe space. We must continue to create more safe spaces for LGBTQ people.”

And Donatella said: “When I look out at all of you, I see the world as it should be and as it can be. A world where we celebrate each other… where we embrace and honor the legacy of our past to empower our future.”

However, speaking to Billboard, the head of GLAAD, Sarah Kate Ellis, emphasised how much more needed to be done. “It’s a moment to look to the future — what’s on our agenda, what do we still have to do,” she said.

“There are 11 trans women of color who have been murdered this year — there’s no press on that right now. We can still be fired in over half the states in the United States, put through conversion therapy, denied housing, and it’s still criminalized in 70 countries around the world.

“We have a long way to go, but this is a moment to pause and celebrate.”

Related: The Stonewall uprising: 50 years of the movement | Amplify by GAY TIMES