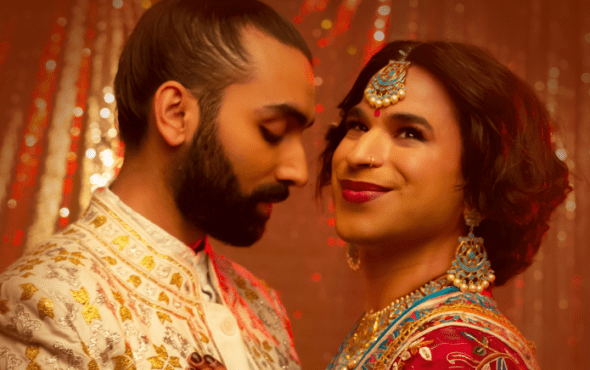 The BFI Flare film, which pays homage to South Asian queer communities, was directed by Shiva Raichandani and executive produced by Huma Qazi.

Queer Parivaar (which translates to ‘Queer Family’) is a dynamic short film that puts trans, non-binary, and gender non-conforming identities front and centre.

The LGBTQ+ short meshes Bollywood influences and powerful storytelling to introduce the audience to a world of self-discovery and family.

Queer Parivaar narrates a story of a queer couple forced to confront past family secrets after an estranged family member crashes their joyous wedding.

A moving story, the production takes a look at LGBTQ+ identities in a South Asian cultural context and the powerful existence of interfaith romances, chosen families, and intergenerational differences.

Actor and activist Jameela Jamil shared news of Queer Parivaar’s first trailer on Twitter. Jameela Jamil, who is of South Asian heritage, came out as queer in March 2020.

“In partnership w/ I Weigh, I’m thrilled to present the trailer for #QueerParivaar, a new film directed by @ShivRaichandani: https://youtube.com/watch?v=QaXJbqWT0i8,” the presenter posted. “It’s a captivating musical celebration of South Asian queer love & community..check it out & catch the film at a festival near you!”

In partnership w/ I Weigh, I’m thrilled to present the trailer for #QueerParivaar, a new film directed by @ShivRaichandani: https://t.co/CZxAVqwcLH
It's a captivating musical celebration of South Asian queer love & community..check it out & catch the film at a festival near you!

Speaking on the musical short, director and producer Shiva Raichandani opened up about what the production meant to them: “Showcasing positive and joyful imageries of queer south Asians in love and being loved for who they are is incredibly powerful and rare.

“I created Queer Parivaar to let people be part of a film that brings those identities and their wider intersections to the forefront – both on and off-screen. It’s a celebration of the many ways in which we find love from others, like chosen families, and from ourselves. To have Queer Parivaar debut at the prestigious BFI Flare is nothing short of a dream come true.”

Queer Parivaar will be premiering at this year’s BFI Flare Film Festival. Executive Producer Huma Qazi described the film as “important storytelling” for all generations and all cultures and that it “gives audiences a glimpse into parts of our community, relationships, identity and simply being loved for who you are”.

Queer Parivaar will include some of the biggest names in the South Asian queer scene including Britain’s first out Muslim drag queen Asifa Lahore, DJ Ritu Khurana, and intersex activist Anick Soni.

You can watch the first trailer for the BFI Flare film here or below.