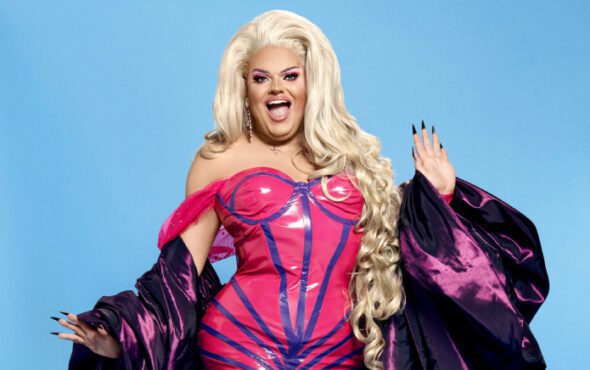 Kitty Scott-Claus will be one to watch on the RuPaul’s Drag Race UK season three edition of Snatch Game.

The 29-year-old performer from Birmingham, who you’ll recognise as a member of Girls Aloud tribute band Gals Aloud with season one alum Cheryl Hole, has a passion for impersonating British celebrities such as Gemma Collins, Nadine Coyle, Cilla Black, Jane McDonald, Ester Dee and Talia Storm.

Speaking exclusively with GAY TIMES, she admits: “When I got the call to go on Drag Race, Snatch Game was the one to me where I was like, ‘This is the one that I’m so excited for.’

“Growing up and watching the show and being such a huge fan, it was always one of those absolutely iconic challenges that you’re like, ‘I have to get to Snatch Game and I have to absolutely kill it.’

“I love impressions and this is exactly what I want to do!”

Snatch Game is a make-or-break challenge for competitors on Drag Race.

The staple challenge separates the drag queens from [insert country here]’s Next Drag Superstar as seven winners have gone on to win the entire series: Jinkx Monsoon, Bob the Drag Queen, Alaska Thunderfuck, Aquaria, Trinity the Tuck, The Vivienne and Shea Coulee. So, it’s important to do well.

The challenge she wasn’t looking forward to, however, was – can you guess? – the infamous sewing challenge, which has resulted in several shock eliminations from a variety of experienced entertainers throughout the franchise’s herstory.

To combat her lack of skills concocting a garment, Kitty recruited her grandma Beryl to teach her how to sew. “Beryl did me good!” she says. (C’mon Beryl!)

“The aspects of the show that I was nervous about I practiced for last year in lockdown. I’ve never competed for anything before in my life,” she continues.

“When we go to auditions in musical theatre, it’s like you go through the audition and if you don’t hear anything back, you move on. This one is all in front of you and I was like, ‘Bloody hell this is a lot.’ But do you know what? It was so much fun.”