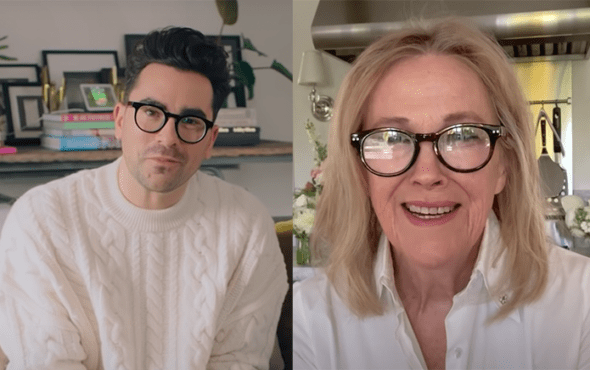 Dan Levy and Catherine O’Hara have both been awarded a Critics’ Choice Award for their incredible performances on Schitt’s Creek.

Schitt’s Creek has swept up another round of awards and it looks like there is no stopping the beloved Canadian sitcom!

During his speech, Dan thanked critics and fans for their endless support of Schitt’s Creek: “Thank you for supporting and championing a character like David,” he said.

“I have so appreciated reading all of your thoughtful and encouraging words over the years and sometimes when you don’t often see yourself represented that much on-screen you have to take a risk and make it happen for yourself. Thank you so much for this, it means the world. Thank you.”

Massive congratulations to both Catherine O'Hara and Dan Levy for their #CriticsChoiceAwards wins tonight! 💛 pic.twitter.com/usqsYQLKc0

The beloved Catherine O’Hara was also recognised for her role as Moira Rose on the hit show.

The Schitt’s Creek star was awarded Best Actress in a Comedy Series at the 2021 Critics’ Choice Awards.

In her acceptance speech, the actress thanked the Critics’ Choice Award for “recognizing my work with this lovely Schitt’s Creek parting gift”.

O’Hara also acknowledged how grateful she was to work on an award-winning show like Schitt’s Creek: “I say “work,” and like everyone on the show I did work hard, but all I can remember now is the sheer joy of being inspired by our great scripts, challenged by my ridiculously talented castmates and our beyond-creative crew, charmed by our wonderful hair and makeup and wardrobe fairy godmothers, and made to feel like a queen by the sweet, fun-loving people who watch our show, because you told them to,” she said closing her speech.

Dan Levy, Catherine O’Hara, and the show itself won awards at the 78th Golden Globe Awards.

Schitt’s Creek was nominated for a total of five categories at the Golden Globes and scooped up three wins, extending its impressive track record of award show triumphs.

Related: Catherine O’Hara on how Schitt’s Creek gets queer representation so right