Hosted virtually by Tina Fey and Amy Poehler, the Golden Globes kicked off a little late, but with no major blips.

As the wins were unveiled, Schitt’s Creek was announced as the winners of the Best TV series.

The brilliant Catherine O’Hara was also awarded a Golden Globe for Best Actress in a Musical or Comedy TV Series.

Schitt’s Creek was nominated for a total of five categories in total.

During his speech, Levy announced his gratitude to his fellow cast for their support for making the show as successful as it has been: “The incredible work you all did over these past six seasons has taken us to places we never thought possible and we are so grateful to all of you for it,” he said.

Last year, the beloved Canadian show made history last breaking the record for most Emmy wins in a single season for a comedy.

Schitt’s Creek became a global success for its representation of LGBTQ+ romance and for its visibility of queerness. 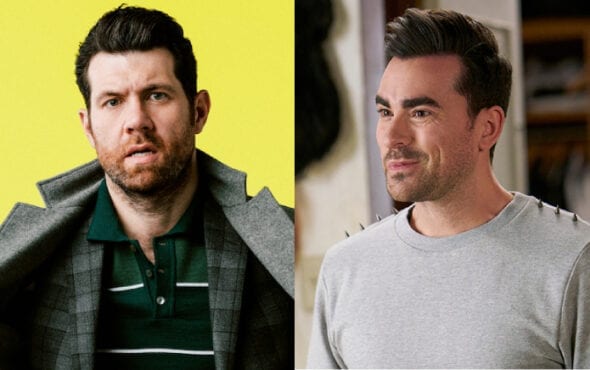 However, Levy also addressed how far the film and TV industry needs to step up to bring a greater range of diversity to the screen.

“This acknowledgement is a lovely vote of confidence in the messages Schitt’s Creek has come to stand for: the idea that inclusion can bring about growth and love to a community,” Levy read.

“In the spirit of inclusion, I hope this time next year this ceremony reflects the true breadth and diversity of film and television being made today because there is so much more to be celebrated.”

Levy’s call out for diversity is particularly interesting as criticism around the Golden Globes has surfaced due to the Hollywood Foreign Press Association (HFPA) lack of in-house diversity.

HFPA president Ali Sar and members Helen Hoehne and Meher Tatna made an appearance during the awards ceremony and announced “Black representation is vital”.

This moment received backlash as the HFPA currently have no Black members on the board. Sar promised they wanted to make diversity the “norm” and were “going to make that happen”.

Commenters online didn’t seem to buy the announcement and called out the awards for its lack of support towards Black projects and diverse reactors.

thinking about how sophie okonedo was completely robbed,, and its 100% a result of racism in the hfpa pic.twitter.com/awnrozPKLi

Thank you Amy Poehler and Tina Fey for bringing the lack of representation in the HFPA to light. Real change must come #GoldenGlobes

Jane Fonda is mentioning all the movies and TV series that the HFPA ignored because she knows what's up.#GoldenGlobes

You can watch Dan Levy’s Golden Globe awards speech here or below:

Dan Levy dropping some truth about inclusion and urging the #GoldenGlobes do better at acknowledging diversity during his #SchittsCreek series win. pic.twitter.com/xyxgbT3sPz

Related: Schitt’s Creek and The United States vs. Billie Holiday score at the Golden Globes