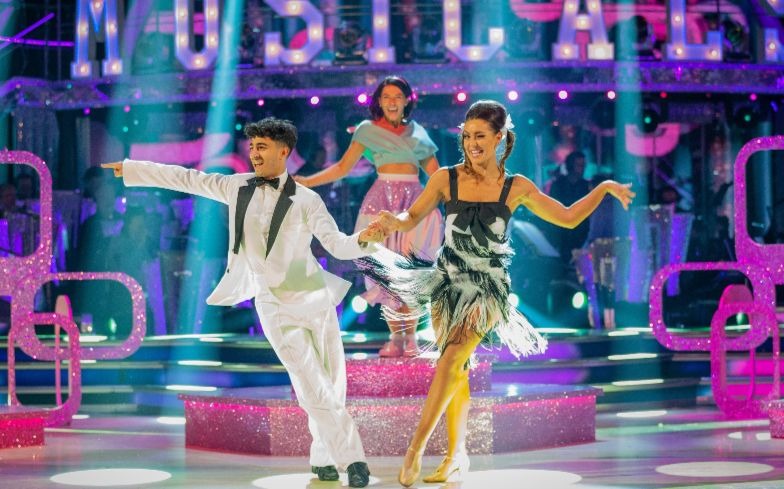 It was always going to be either him or Kelvin Fletcher after Michelle Visage’s early exit.

We’ve been waiting for eleven weeks, but Craig Revel Horwood has finally dusted off his 10 paddle, and given it to CBBC star Karim Zeroual, after he performed a sensational jive.

Last week, YouTube star Saffron Barker was eliminated, after facing Karim in the dance-off. Given there was a 12-point gap between their original scores, it was no surprise to see Saffron voted off the show by the judges. It is a bit of a shame, as a final with her, Karim and Kelvin would have been sensational viewing, and it leaves pro AJ Pritchard still waiting for his first Strictly final.

The quarter-final of Strictly always brings some of the best and most memorable routines to the front, like Faye Tozer’s Charleston last year, or Debbie McGee’s American smooth the year before. And this year, it delivered with three sensational routines, and two decent ones.

And as always the show was opened with an incredible routine from the professionals to a medley of songs from Hello, Dolly! And it wasn’t just the professionals dancing as all of the judges joined in with the fun as well, with Craig Revel Horwood coming out in full drag to steal the spotlight. Sorry Anton and Kevin, your singing was nice, but Craig was the indisputable star of that number.

We didn’t have a poll last week, but it’s back again this week, so make sure to vote for your favourite dance of last night by following this link.

The first celebrity dance of the evening was comedian Chris Ramsey, as he took on the foxtrot to Consider Yourself from Oliver! Chris has progressed far in the competition, and this was a suitably fun number that made you smile, even if it lacked in some of the technical aspects.

Footballer Alex Scott likewise has progressed far since the start of the competition, but her samba to Joyful Joyful was quite shaky. At least we got the joys of Craig telling Bruno about all the “weird positions” he likes during the critiques. Almost as memorable as the shade from last year’s movie’s special.

But the show was saving its strongest cards for the final parts of the show. And it was clear to see as Kelvin Fletcher delivered an American smooth that was as strong as the character he was for the dance, Gaston. My, what a guy.

Recovering from last week’s dance-off, Karim Zeroual absolutely stole the show with a sensational jive. All of his kicks and flicks were in the right place, and he truly embodied the jive as he danced it. And this was the dance that finally cracked Craig, as he awarded it his first 10 of the series, and allowed the CBBC cutie to get the first perfect 40 of this series.

Although it might’ve been a smarter move to finish the show on Karim’s rotuine, it was EastEnders star Emma Barton who closed the show out, and she closed it in style. Her Charleston to Thoroughly Modern Millie was cheeky, fun, and for a glorious 90 seconds it felt like we’d been teleported back to the 1920s. Ironically, it was anything but modern, but that’s why we loved it.

This time, Karim Zeroual topped the leaderboard, although Emma Barton and Kelvin Fletcher were only one point behind him. Meanwhile, down on the other end were Alex Scott and Chris Ramsey with a score of 27 and 28 respectively.

As the series goes on, it’s harder to say who could end up in the bottom two with people like Michelle Visage and Karim Zeroual having fallen there in the past despite finishing high up on the leaderboard. However, it’s not out of the realm of possibility to see either Alex or Chris there, and if there is a shock person in the dance-off, chances are it might be Kelvin this time around.

And if you want to see what a perfect jive and near flawless Charleston look like, then look no further, as you can see Karim and Emma’s performances below or by following links here and here respectively.

Strictly’s next live show, and semi-final is next Saturday (7 December) at 19:00 on BBC One. And if you still need Strictly magic in your life Strictly: It Takes Two will be on every weekday at 18:30 pm on BBC Two, and 18:00 on Friday.