But I’m A Cheerleader: The Musical is a wonderfully camp take on cult queer classic film – review 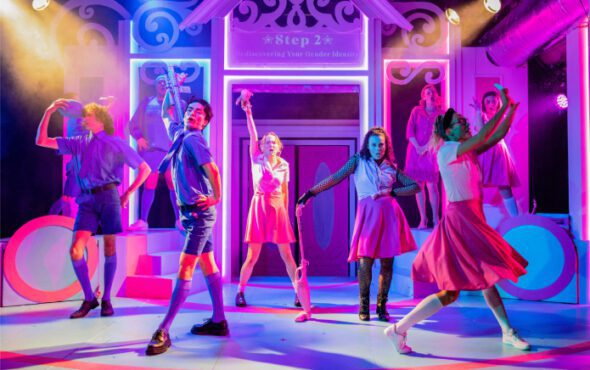 We’ve been big fans of the Turbine Theatre since it opened back in 2019 – whether reviving important queer stories like Torch Song or My Night With Reg, or programming new and joyous shows like My Son’s A Queer (But What Can You Do?), their work has consistently impressed us. But I’m A Cheerleader: The Musical is no exception – it’s a wonderfully camp take on the cult queer classic film from 1999. For those unfamiliar, it’s a quirky coming-of-age comedy about sexual awakening and self-realisation.

It tells the story of Megan (Alice Croft), the all-American high school cheerleader who, on the surface, seemingly has the perfect life – a high achiever with a steady boyfriend and loving family. However, things take a turn when those closest to her suspect her of being a lesbian and send Megan off to True Directions, a rehabilitation centre which will, supposedly, set her straight. Under the strict tutelage of headmistress Mary Brown (the hilarious Tiffany Graves) she undergoes a five-step programme with the intention of unlearning her sexual yearnings, but while there she meets the tomboy-ish Graham (Evie Rose Lane) and… well, we won’t spoil what happens.

This may sound an unusual pitch – a comedy which tackles the issue of conversion therapy – but this irreverent musical really is funny and heartwarming in equal measure. There are no weak links in the cast, but we particularly enjoyed Alice Croft in the lead role, who has some wonderful moments – especially in the second act, with a great song and some witty punchlines concerning how to live like a lesbian. Tiffany Graves is perfectly cast as headmistress Mary; Aaron Teoh moved us to tears with a song about wrestling (yes, really); and the always-brilliant Jodie Steele, who we adored in Heathers: The Musical on the West End, pretty much steals every scene with a hilarious one-liner or some wonderful physical comedy.

We had an absolute blast with But I’m A Cheerleader: The Musical. Does every punchline land perfectly? Not quite, but the jokes come thick and fast with a decent hit rate. Are some of the songs a bit chaotic? Yes, but the music is mostly excellent, and there’s some seriously impressive vocal talent on display amongst the cast. Do these minor quibbles matter? Not at all. We’re so pleased the team at the Turbine have staged yet another gem of a production; hopefully it will achieve queer cult classic status like the film. Grab a ticket while you can!

GAY TIMES gives But I’m A Cheerleader: The Musical – 4/5