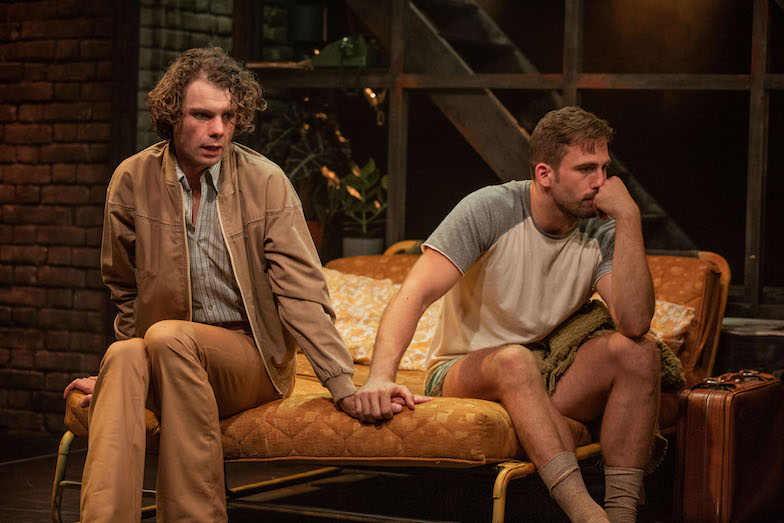 This new, abridged production of Harvey Fierstein’s 1978 trilogy has opened at the Turbine Theatre, directed by Olivier award-winner Drew McOnie.

Torch Song is the Turbine Theatre’s inaugural play; this cosy space, nestled in a railway arch in the shadow of the Battersea Power Station redevelopment, provides a wonderfully intimate setting for Fierstein’s landmark play. Over the course of three acts, it offers a trio of snapshots into the life of Arnold Beckoff (Matthew Needham), a fierce New York drag queen on a quest for love in 1970s Manhattan, touching on a variety of universal themes including love, loss and identity.

It may now be more than 40 years old, but this revival still packs quite a punch. Needham is wonderful as the razor-sharp and acid-tongued Arnold, throwing out cynical asides as if they were going out of fashion. The first of the three acts, International Stud, focuses on his encounters with bisexual Ed (Dino Fetscher), a devastatingly handsome and evidently confused teacher. We also gain an insight into Arnold’s forays into the world of dark rooms, with one particularly entertaining sketch involving the lighting of a cigarette – it’s an exemplary demonstration of physical comedy.

The second act, Fugue in a Nursery, introduces us to Ed’s new wife Laurel (Daisy Boulton). In a dysfunctional set up reminiscent of Noel Coward, the couple have invited Arnold and his new partner Alan (Rish Shah) to visit. After the interval we’re treated to Widows and Children First, in which Arnold is going through the process of adopting a 16-year-old son David (Jay Lycurgo). We’re also introduced to Arnold’s argumentative mother (Bernice Stegers) who certainly has some opinions on the proposed adoption.

While Needham’s is the standout performance, there isn’t a weak link within the cast. We were surprisingly taken with Daisy Boulton’s depiction of Ed’s wife Laurel – we went in expecting not to like her, but her part is surprisingly nuanced and interesting, not to mention her lines being extremely funny – we’d certainly have liked to have seen more of her. Bernice Steger’s performance as the mother was highly entertaining too, and again would have benefited from a little more air time.

This production of Torch Song is well worth making the trip to Battersea for – it’s full of both hilarious and very touching moments, and many of its key themes and characters still feel very relevant today. We thoroughly enjoyed our evening at the Turbine Theatre and we can’t wait to see what they do next.