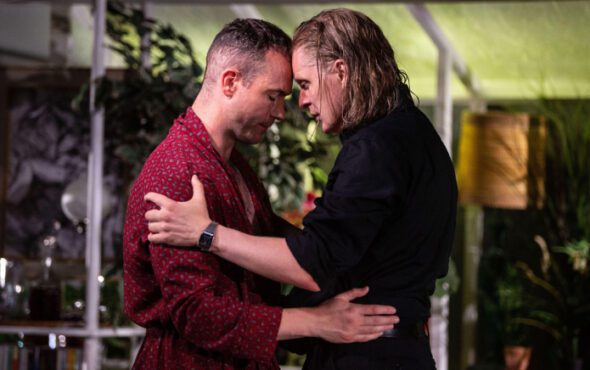 The Turbine Theatre has revived the Olivier Award-winning My Night With Reg in a new production directed by Matt Ryan.

We’ve had to wait a little while to catch My Night With Reg – a Covid app ping prevented us from attending press night, and when we tried to reschedule, the show had to close for a few days while the cast and crew isolated – such are the times we’re living through. Thankfully, third time lucky, we made it down to the Turbine Theatre at the weekend to see what the fuss was about. We’re big fans of the queer programming at The Turbine Theatre, having thoroughly enjoyed everything we’ve seen there to date, and of course we were excited to see this show in particular.

We’ve previously seen Kevin Elyot’s final play, Twilight Song, when it premiered at The Park Theatre in 2017 and more recently reviewed the West End revival of his 1982 play Coming Clean when it played at the Trafalgar Theatre. Elyot is of course best known for My Night With Reg, his seminal queer classic and – in the light of the current pandemic – this seems like an extremely timely revival.

It’s an intelligent play, one which says an awful lot by deliberately not giving its audience certain pieces of information. We never meet the titular Reg, even though he’s clearly a key player this friendship group, and not once does anyone mention AIDS – which is of course one of the focal points of the play. There are three scenes – act one is a flat warming party, while the subsequent scenes each follow the death of a member of the friendship group.

There are some excellent performances here; in particular we adored Paul Keating’s Guy, the host of the flat warming party. We warmed to him immediately – delightfully awkward, and hopelessly in love with his university friend, he’s acutely aware of his advancing years and still being single, all the while channeling his frustration into knitting and cooking. We’ve all known this guy – some of us probably are him. The show unfolds in his apartment – which looks beautiful and has some gorgeous details. In fact, it’s a play full of attention to detail, whether we see characters clocking a worrying-sounding cough later on in the show, or observe humour being derived from weirdly awkward hugs.

We really enjoyed our night with Reg. This revival has lots of great performances – whether Gerard McCarthy’s Daniel is dishing out absolute zingers with expert comic timing, or Stephen K Amos’ Benny is playing the amusingly inappropriate comic foil to Alan Turkington’s entertainingly dull Bernie, we loved getting to know these characters. In terms of LGBTQ+ theatre this may not be the most contemporary show, yet its themes are universal and will resonate with the queer community today. We all know a Guy, or a Daniel, or a Benny or Bernie, or indeed a Reg – and we saw a lot of ourselves in the way these characters interacted with each other. It’s always a delight to see these narratives told so authentically on the stage – well worth picking up a ticket.