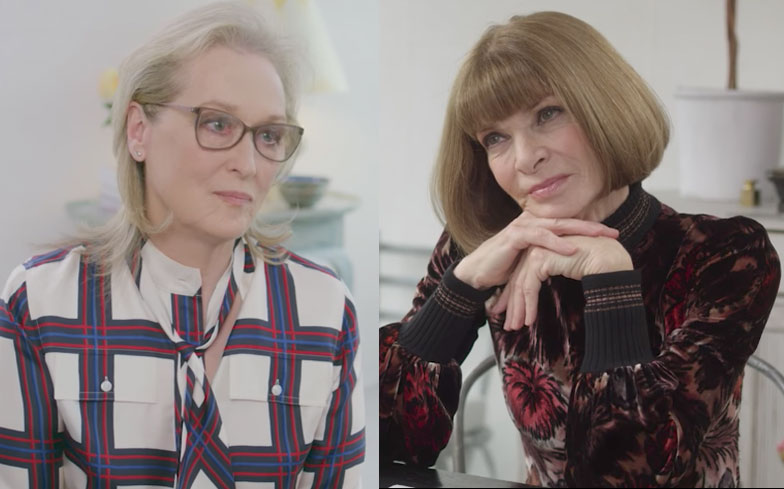 As Hollywood legend Meryl Streep covers a special edition of Vogue, she met with its editor-in-chief Dame Anna Wintour.

In what’s the most epic modern remake of a certain signature film of Meryl’s, the pair discuss politics, the ongoing revelation of sexual assaults in Hollywood, and even the possibility of a female president within their lifetime.

However, the opening scene will leave fans of both screaming at their screen when a seeming parody of Meryl’s signature role in The Devil Wears Prada plays out.

Serving up some serious Miranda Priestly realness, Meryl begins with a homage to the signature elevator shot – back against the wall and doors closing in front of the camera.

Shortly after, Meryl hands her coat to an employee in the office… but in a somewhat nicer way than Miranda ever did. However, an truly iconic moment from the pair came when Dame Anna questioned Meryl on the incredible women she’s played on screen before.

“Obviously, you’ve played a lot of extraordinary women,” Anna said. “What was the most challenging woman you ever played?”

“Oh! I should say…” Meryl answered before gesturing towards the Vogue legend. “No. No. We’re not going there, Meryl,” Anna quickly replied back.

It’s widely believed that Meryl’s turn as Miranda Priestly is based on Dame Anna – although that’s never really been confirmed.

Is this the closest Meryl’s come to getting a confirmation from Dame Anna? Quite possibility.

You can watch the incredible video below.

Meryl’s cover Then & Now for Vogue.

Meryl Streep stars on the cover of our December issue! Read the full interview: https://t.co/ty2VvPt6T0 pic.twitter.com/yMmVN9Z4tM

Elton John will write the music for a stage adaptation of The Devil Wears Prada on Broadway.

The Grammy-winning artist will join forces with playwright Paul Rudnick, who will pen the book and lyrics, to retell the story of Andrea and her tyrannical fashion editor-from-hell Miranda Priestly.

Elton said: “Re-imagining The Devil Wears Prada for the musical theatre is super exciting. I’m a huge fan of both the book and the feature film and a huge aficionado of the fashion world.

“I can’t wait to sink my musical teeth into this hunk of popular culture.”