Above the Stag houses the majestic giraffe of queer panto – review 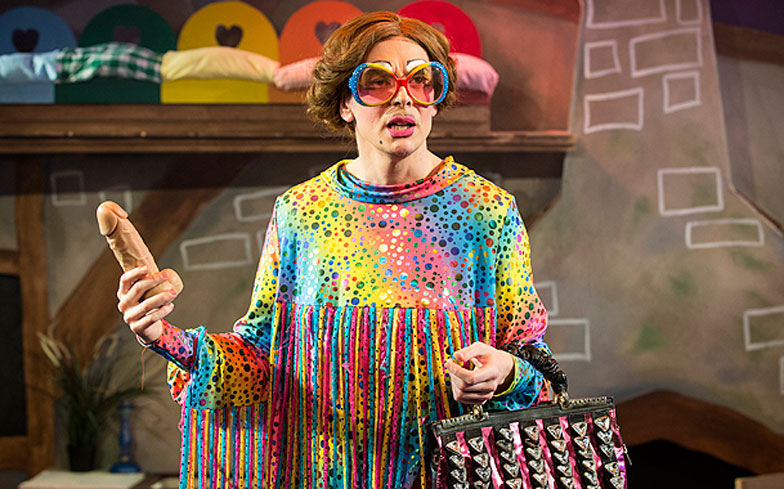 The Above the Stag panto has become an institution.

This year’s offering, written by Jon Bradfield and Martin Hooper, is their best to date. The pair have made quite a name for themselves with these frivolous festive fancies, and right now they are at the top of their game – the writing sings, the gags land, and the songs are sublime. (Two Bears and a Twink being our particular favourite ditty.)

The story unfolds in the land of Lumley-by-Gosh – a walled-off and isolated borough of London, presided over by the wicked Queen Babs. Young servant lad Snow White is dreaming of a handsome prince to come and sweep him off his feet – but can he survive the machinations of the jealous old queen who is resentful of Snow’s youthful good looks? Several subplots also bubble away, with Bradfield and Hooper expertly keeping several balls in the air simultaneously, ensuring that we are constantly entertained, captivated and enthralled.

Matthew Baldwin leads an outstandingly excellent cast as Nanny – a pitch perfect performance as a droll and demure dame, full of wry sardonic wit. Shaun Mendum as Snow White is completely adorable and demonstrates fine movement ability as he twirls and leaps through the musical numbers. Mendum is also especially hilarious when, after some ill-advised mastication of a poison apple. He’s left in a corpse-like state. Hysterical!

Above the Stag regular Briony Rawle is on fine form as Taleesha, Snow’s friend and fellow servant, a streetwise lass on a quest for quim, who wrestles with her conscience when instructed to murder Snow.

Scott Howlett is eminently watchable as posh-totty Prince Charming. When the Fairy asked the audience if they’d like to help with a spell to put the Prince’s clothes back on, the answer was a resounding ‘no’.

Kris Marc-Joseph and Michael Robert-Lowe form a memorable double act as the bear couple whom befriend Snow in a forest cottage. A touching relationship that’s really rather moving with jealousies and insecurities are aired alongside physical slapstick that sees the substantial pair forced to perch upon furniture intended for dwarves.

Andrew Truluck gives us an impressive variety of smaller parts, which include a magical entrance that we won’t spoil by giving away here.

Stealing the show, for us, is Christopher Lane as Queen Babs. A tour-de-force of a performance that has the audience booing and hissing throughout. Lane dazzles with an excellent caricature of a bitter and twisted gay man obsessed with preserving his looks and holding back the ravishes of time. A proper villain that we loved to hate. Bravo!

Set design by David Shields and lighting by Jamie Platt are, as we’ve come to expect from the Stag, exemplary. The dwarves’ cottage is a notable triumph – complete with ‘Smegma’ fridge. Tthere’s an impressive secret concealed in the design that drew gasps as it was revealed.

This is the majestic giraffe of queer panto – head and shoulders above the rest. We awarded five stars to last year’s effort but this is even better – we’ve run out of stars to give! As with previous shows, Snow White – Rotten to the Core sold out before it opened, so unless you’ve already got a ticket, it’s unlikely that you’ll get a chance to see it.