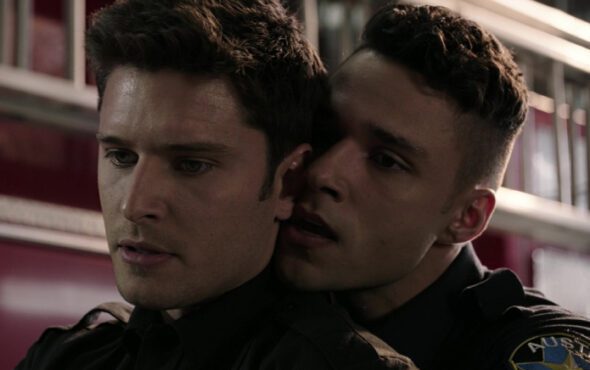 According to star Ronen Rubinstein, who makes up one half of TV’s favourite first responder couple as TK Strand, the upcoming third season of 9-1-1: Lone Star will ‘not hold back’ with Tarlos storylines.

Speaking with Digital Spy, the actor revealed: “I’ve heard about so much stuff that’s going to happen in season three. Again, they’re not holding back, especially with my character, and my relationship with Carlos.

“They’re not holding back, and I think they’re really embracing what’s been going on, and the reception to our characters. It’s only going to get bigger and crazier. I can’t wait to talk about season three, that’s for sure.”

When asked if there are wedding bells in store for TK and Carlos Reyes, played by former GAY TIMES cover star Rafael Silva, Rubinstein teased: “You know, I think it’s bound to happen.

“This is not a secret – I’m able to say this because our showrunner is teasing it, and he says it’s almost inevitable. But it’s all about timing. How long have they really been together? Is their relationship strong enough to get married?

“And I think the big question is, is TK even ready to get married?”

Rubinstein added: “I think we’ll definitely know by the end of the season. It’s more of a matter of when than if it will happen.”

Lone Star, which focuses on the fire and police departments in Austin, Texas, was confirmed to return for a third season earlier this year. Created by Ryan Murphy, Brad Falchuk and Tim Minnear, Lone Star has received widespread acclaim for its diverse and inclusive casting, receiving a nomination for Outstanding Drama Series at the GLAAD Media Awards.

Brian Michael Smith, who plays firefighter Paul Strickland, memorably made history as the first out Black trans man in a series regular role on network television.

During our conversation with Silva, the star attributed the success of the series to the talents of the writers’ room and the diverse array of loveable characters, all of which are unapologetic and unabashed in their identities.

“The diversity and inclusivity of [9-1-1: Lone Star] resonates with people because that’s what the world has always looked like,” he said.

“[Lone Star] shows more truth than perpetuated stereotypes of each person, of gay characters, of trans characters, of the Muslim culture, even the Texan culture. It has resonated with a lot of people because it portrays what the world looks like today, and what it’s always looked like.”

You can read our entire cover conversation with Silva here.