The love boat! How the world’s first LGBTQ cruise is shaking up the seas 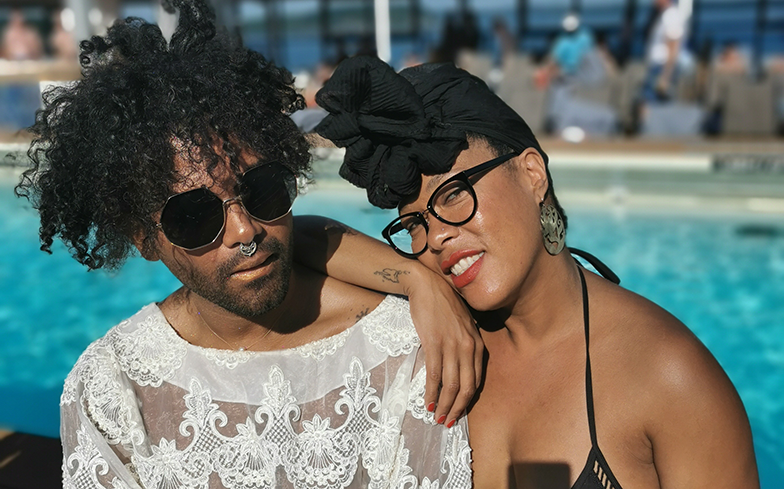 ‘I am a gay cruise virgin,’ I tell someone dressed as Eartha Kitt drinking a Long Island Ice Tea through a straw so as not to spoil lips that have taken an aaaaage to apply, even though it’s only halfway through the afternoon. And hot in that sun! ‘Please be gentle with me.’

Not that this is strictly speaking a gay cruise, you understand, even though the sheer numbers of men dressed in something a) very sexy and tight and revealing or b) very flamboyant and time-consuming to put together would seem to suggest that it was. No, this is VACAYA, new cruising kid on the block – created by a bunch of clever people formerly off-of Atlantis and RSVP, so they know their stuff – and this is the world’s first LGBT+ cruise, with special meet ‘n’ greets for Ls and Bs and Ts and even straight allies just to get balls rolling. The Gs, over 90% of the population on the boat, are left to their own devices. Don’t you worry about them. They’ll be fine.

The Godmother of our ship, for instance, is Broadway diva Kristin Chenoweth – of course! – who pitched up on that little stage over there beyond the swimming pool and the twin hot tubs with men in Speedos (even though it’s cocktail hour!) in a rainbow sequined dress to warble us past the Statue of Liberty as the delicious Celebrity Summit, the crème de la crème de la crème of cruise ships, eased out into the open waters of the Atlantic.

It was around the Kristin Chenoweth point that I, the LGBTQ+ cruise virgin, realized that I hadn’t brought nearly enough outfits. I’d already seen people onto their third and I’d barely unpacked my John Frieda Frizz Ease. And all of their three were better than everything I had stashed in my stateroom (complete with big balcony hung with a colour to give the effect of a rainbow when the ship sailed into Bar Harbor or maybe even Provincetown, as it would a few days later, the only gay cruise ship ever to be allowed to stay overnight. Maybe that’s where being LGBTQ+ gets you).

If, like me, you should find yourself an LGBT+ cruise virgin, here’s a few words from the (newly) wise. Read those party themes and take as many outfits as you can lug. There’s no limit. Also, swimwear, swimwear, swimwear. You’re going to be in it a lot and seeing the same people so you need to change it up. Don’t worry about dieting or going to the gym as this is about as diverse a bunch of people as you’re likely to cruise with: all ages, all sizes, all styles, some women. The only thing they seem to have in common is the desire for costume changes.

And it really is refreshing to see guys who would probably play it down in a T-shirt/short combo on a regular holiday floating around in cover-ups, exploring a little, maybe trying a heel. Because let’s face it, safe spaces couldn’t be much safer. We’re surrounded by sea, for goodness sake.

Oh and take note of the custom of decorating your cabin door (we didn’t even know what they were talking about): do that door up, take some stuff like Blu Tak, some pictures of you looking hot, some people even get business cards with their cabin number on it printed up for the handing out at parties, which can get fresh. Your door is your shop window. Use it wisely.

And be ready to be sociable. You can seriously go on your own on VACAYA and you’ll be fast friends with as many people as you like within moments. We hadn’t even passed the initial check-in conveyor belt and we already felt as popular as a high-school cheerleader.

You will also need stamina. Drinks start whenever you want them to, over breakfast, brunch, lunch, tea, late tea, high tea, cocktails, pre-dinner cocktails, dinner, after dinner…  and there are a minimum of two dress-up parties a day.

Food is from the free 24-hour buffet (amazing, varied, everything from poppadums to ice-cream, Sunday roast to vegan kebabs), or from the speciality restaurants where you pay a pretty reasonable supplement. And cabin service is free most of the time!

Then in between parties, probably with your new friends, you can take in a show (pretty fresh-off-Broadway stuff, turns you’ve actually heard of like Katharine McPhee and clutch bag-sized Leslie Jordan off-of Will & Grace who we rode the lift with not once, not twice but thrice times) in the amazingly kitted out theatre, try your luck in the casino, slip to the gym, do some laps in the solarium, have a facial, visit the Red Light District, an after-dark, erm, meet ‘n’ greet area… the possibilities are endless.

‘So, how was it, virgin?’ says a burly man in a wife-beater as we shuffle to the lifts with luggage – mine about 10% of everyone else’s – on the morning the cruise ended. ‘Did it hurt?’

It was in fact among the best holidays I can remember with flirting and drinking and taking in a show and eating and sea air and a sing-song around the piano with a cocktail… all without having to move more than five minutes from a sun-lounger. Oh and the burly guy. Don’t know, but there was something about the lips.

Go to MyVacaya.com for details of future cruises and other organized LGBTQ+ fun, including this summer’s Lisbon Pride Cruise, an Icelandic adventure, plus a winter escape to Mexico.

We flew to from London to NYC with Norwegian.com/uk