Stay or Away: Wine-tasting in Cornwall and Istria 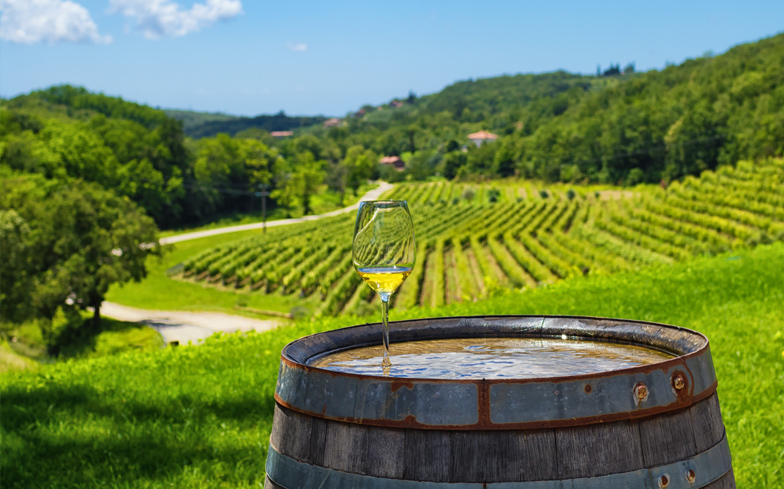 When the hustle and bustle of that city life is getting on top of you, a retreat to the idyllic countryside is, more often than not, the perfect relaxation remedy.

And what better way to unwind than with a spot of wine-tasting? Here we present two destinations – one that requires a plane journey and another more closer to home  –  where you can discover new wines while surrounded by nature. One of the largest and most beautiful counties in England, Cornwall spans almost 4,000 square kilometres forming Great Britain’s South West peninsula. Famed for its sprawling moors, a mix of pristine and rugged coastline and harbour towns, Cornwall is charming and quaint, but has a few surprises hidden behind the stereotypes.

Cornish pasties, real ale and cream tea have long been the staples of Cornish living, however, much to the surprise of many, Cornwall is one of the top wine producing regions in the UK.

While you wouldn’t be wrong to assume that the weather in the British Riviera can be a little wet and wild, some fearless viticulturists have made it their mission to produce award-winning grapes. Jutting out into the Atlantic Ocean on one side and into the English Channel on the other has afforded Cornwall a mild climate with long sunlight hours – ideal for thriving vineyards, as well as days on the beach.

Take a trip to the Celtic Kingdom and stay in The Bunker, a beautifully converted WWII operation bunker close to the white sandy beach of Sennen and the iconic Land’s End. Surrounded by glorious countryside, the area is popular for hiking enthusiasts or those who prefer coastal strolls. Local exploring will uncover tropical sub-gardens, art galleries, including that Tate at St Ives, and award-winning vineyards.

A short distance from Penzance, which can be reached by foot at low tide from The Bunker, Polgoon Vineyard and Orchard produces a range of artisan Cornish wines. Take a wine tasting tour and try the bouquets created by the Cornish coastline before returning to The Bunker’s private patio, where glistening English sunsets offer the perfect accompaniment to an intimate evening with your new favourite tipple.

Should you want to go further afield, there are several Cornish producers turning heads on wine’s world stage, making it the ultimate destination for a summer wine weekend.

The Bunker is available from £759 for seven nights. Visit cottages.com to book your stay.

While Dubrovnik throngs with tourists year-round, Istria, Croatia’s peninsula on the Italian border, is swiftly becoming a more appealing option. A land of cultivation on the coast, Istria’s landscape is vastly different to the wild and mountainous southern coastline of Dalmatia that we’ve all come to know through Game of Thrones. Istria has historically been influenced by Italy, evident in the culture and history of the region, but also in the culinary excellence hailing from Istria’s farmers, producers and chefs.

Venture beyond the coastline and inland Istria welcomes you to a rural hinterland of rolling olive groves, truffle farms and vineyards, guarded by the towering medieval hill towns of Grožnjan and Motovun. A haven frequented by gourmands and wine connoisseurs for centuries, the Mirna Valley is at the heart of Istria’s distinct flavours. Famed for its Teran red wine, homemade fuži and pungent truffles, Istria is fast becoming an iconic wine and food destination. Reside among the bucolic interior of Istria’s countryside at Domus Lauri, a beautiful villa designed with influences of traditional Istrian architecture and finished with modern flair. Natural stone walls and wooden beamed ceilings compliment the spectacular views of the vineyards, olive groves and valley of river Mirna beyond the villas private pool terrace. Within a 30-minute drive is the picturesque village of Groznjan where a handful of authentic restaurants serve up local produce daily.

Award-winning Veralda vineyard, known for its superior quality grand cru wines, traditional olive growing and peppery olive oil, is within walking distance of Domus Lauri. While away an afternoon beneath the Croatian sun one of their wine tasting tours on the beautiful hills of Buje, where special microclimates and soil characteristics ensure a bold palette taste like none you’ve had before. Retreat to Domus Lauri’s baladur for your own secluded and indulgent wine-tasting.

Villa Domus Lauri is available from £729 for seven nights. Visit jamesvillas.co.uk to book your stay.