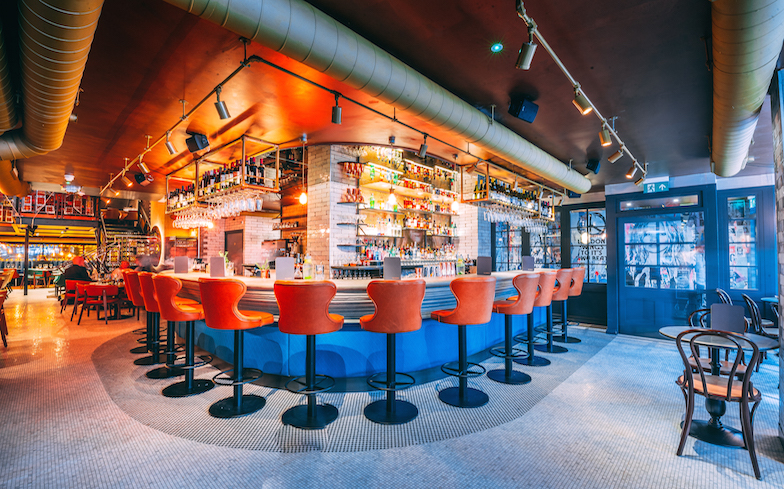 The hoarding outside this place had been there for months, liveried up with pretty, kicky bill-posters featuring clever, kicky famouses of ye olde like Dickens, Marx (Karl not Richard), Lord Kitchener in full ‘tache getting all pointy (who, ME?), Hedda Gabler (still mad as a box of hair, that one), Naomi Campbell, each one broodily heralding the arrival of something called OCB, which is only one letter away from me having to rewrite this opening paragraph seven times otherwise I’ll die. Alone.

Speaking of which, I decided to take a date, a same-sex oriented one who sat in such a way as to suggest free tapenade was enough for him to put out. We’d met about three years earlier and, not wanting to rush things, this was going to be our first actual date, one that actually began sober. Ish. But more of that lunatic later. My older chums were getting giddy at the pending OCB. Ish. They remembered something called Soho Brasserie, circa mid-Eighties, that was bold and brash and grand-as and fun and open all hours and served food like… oh no-one remembers ‘cause it was all about boozing, and was frequented by people who didn’t come to Soho just to point at gays and take their picture underneath G-A-Y while pointing. An old school brasserie with a proud central bar where you had to slice through the atmosphere thick with Benson & Hedges and Aramis to find a seat and gossip and flirt with everyone who was everyone and some people who were no-one at all. A brave old brasserie with spunk and soul. So, like, no pressure.

OCB – because we don’t have time for actual words these days – takes its cue with glitzy abandon. Glamorous yet cheeky and borderline cute, with bar staff in get-ups replete with braces and dickie-bows that are just forcing you to play with them and oversized pendant lights and coloured bulbs, everywhere. It’s Coney Island meets London’s glittering Soho, bright and flashy with lashings of sugar-coloured bar stools and booth after booth after booth because you can never have enough booths, and massive Pop-esque paintings of cool girls probably from Japan on brick walls that are exposed just so, and that thing they do of letting you see all the air-con workings and pipe whatnots up on the ceiling because function is also art.

‘I’m probably going to get a tan,’ says boy, who’s getting more of a cameo in this than he deserves, gesturing towards the lighting. And he works in movies so if anyone were to know… We get one of the à deux tables out the back, just made for dates, and our waiter clearly knows we’re here to review, which I absolutely don’t mind because sycophancy in the food & beverage sector equals fun. I’m going for the PB menu – Plant Based, which is like vegan with added halo – and he’s going all out on the meat, so at least we’re covering bases. For your PB experience we have the PB Burger, which, it says in the blurb, is packed with B12 vitamins so it must be true, wild mushroom risotto with (when in doubt add) truffle oil, and a rather delightful gnocchi. It’s a, dare I say, ‘comforting’ take on bistro classics, and suits this place to the PB bone. Of these, the latter comes highly recommended – ditto the PB Burger with its ‘shiitake bacon vegan cheese’ – and I even feed the date a mouthful. With hindsight I should’ve left the fork in there. The D goes for the braised shin of beef, and he gives me a bunch of adjectives as he chews and clearly he’s not a writer. Over on the nearest booth a bunch of girls are high on cocktails and Soho, the former my waiter tells me are the Paloma (Don Julio Blanco tequila ‘n’ stuff) and Bittersweet Happiness (a whole bunch of gin and Campari) and I’ll take his word for that ‘cause we’re sticking to the red, in this case a nice Cabernet Sauvignon from California which is so drinkable we’ll have more thank you. Oh, and can you imagine all of the above at Christmas? It’s like walking into one of your very own baubles hanging on the tree. All the pretty lights. And they’re doing a nice line in festive nosh, including a £40 set menu. Hang out at the bar if it’s just a liquid lunch, Eddie, or take a booth and hunker on down for the full OCB experience, because that’s what you get. With pretty baubles on. This isn’t the place for rushing things, or going all fancy on one’s ass, or for hawking that screenplay to producers over a sober coffee. It’s a big ol’ cheeky hug of a restaurant, with perfectly pitched food and sloshy drinks for a crowd that’s very much up for it – and you can never have enough of that in Soho. So there we were, half way through our third bottle of cabernet (see above), his hand on my knee, kneading, one would assume flirtatiously, and he stands up and walks out. Right out. No looking back. Nada. Well, at first I guessed he was going to the loo to powder his bottom, but ten minutes later, fifteen, twenty… You catch my dumped-ass drift. Maybe it was the knee.

‘Let’s just hope he’s dead,’ said my girlfriend, who dresses as Buddy from Elf for most of the festive season so clearly has her head screwed on. ‘And to think he got a free meal and didn’t even put out!’