Ready to get your kicks? Head for the legendary Route 66 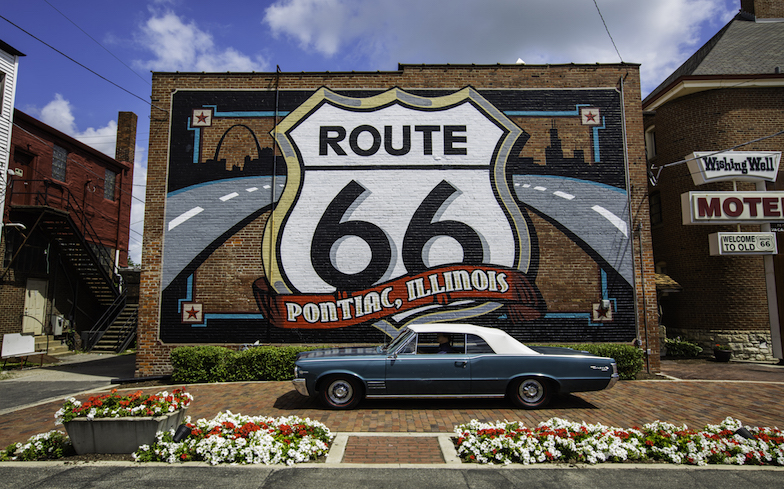 It’s a popular culture icon, perhaps the most famous road in the world (yeah, there’s the Champs Elysees but they don’t actually go anywhere) and a slice of pure Americana. Here’s a little taster of what’s in store. A Top of the Route 66 Pops, as it were…

Begin your legendary journey in the heart of downtown Chicago at the very start of Route 66. Snap the perfect first selfie as you set off on your 300-mile descent down the Mother Road at the iconic Route 66 Begin sign on E. Jackson Blvd.

Before you get too far, it’s time for a little grub at Dell Rhea’s Chicken Basket in Wilmington, which has been serving up some of the best fried chicken on Route 66 since it opened as a gas station lunch counter in the summer of 1946. Since then, it’s been inducted into the Route 66 Hall of Fame, attracting chicken fans from around the world with their original delicious recipe.

No Route 66 journey is complete without a visit to one (or all!) of the Mother Road’s classic museums – especially if you’re a transport freak. A must-see is the Illinois Route 66 Hall of Fame and Museum in Pontiac, packed with the coolest memorabilia associated with the history of Route 66 including the World’s Largest Route 66 shield.

Some of Illinois’ best roadside attractions lie in wait on this stretch of the Mother Road. In Atlanta, grab a selfie with the 19-foot Paul Bunyon (not Bunyan as per the famous lumberjack) and his massive sausage. Or hot dog. It’s pure Americana and one of Route 66’s most famous roadside attractions, one of several giants you’ll pass on your way down the Mother Road. If now is the time for a pit stop, The Palms Grill Café opposite is a Route 66 favourite spot with all of that big American food we secretly love.

A little way down the road in Lincoln, catch a glimpse of the World’s Largest Covered Wagon, complete with a very large – and very studious – Abraham Lincoln statue. The Railsplitter Covered Wagon is officially recognized by the Guinness Book of World Records as the largest covered wagon in the world, standing a towering 24 feet tall. And that’s big!

Corndogs – a marvel of the modern world. But have you ever wondered who decided to put these deep-fried delights on a stick in the first place? Did you even know what a corndog was? Yeah, us neither. Well this is where you learn at The Cozy Dog Drive In, a spot that’s part drive in, part Route 66 museum. Need something to wash that down with? Heading into Litchfield, cut over to the Old Route 66 and take the fabled Auburn Brick Road to Doc’s Soda Fountain in Girard. Voted the fourth best soda fountain in America by Country Living Magazine (who know their soda fountains), it’s is the best way to get all sugared up before the next leg of your trip.

End your day with a visit to the Sky View Drive-In Theater on the other side of Route 66. The last of its kind, Sky View is the only remaining original operating drive-in theater – or cinema! – on the Illinois stretch of Route 66. During warmer months, you can take in the classic dancing hotdogs (why not!) and a double-feature for around ten bucks. Bargain!

Then on to Litchfield, on the southern tip of the Route, where hunger pangs will be satisfied over at the Ariston Café or Jubelt’s Restaurant. The new Litchfield History Museum & Route 66 Welcome Center is also worth a swing-by or, over in Collinsville, there’s a giant catsup bottle – weird, wonderful and, you know, why not?

Our journey ends at the Old Chain of Rocks Bridge just outside Collinsville. Built in 1927, it’s the fifth bridge to cross the Mississippi River and the perfect final selfie as you close the book on your Illinois Route 66 adventure.