London’s most secret hotel is back with a bang… and a festival! 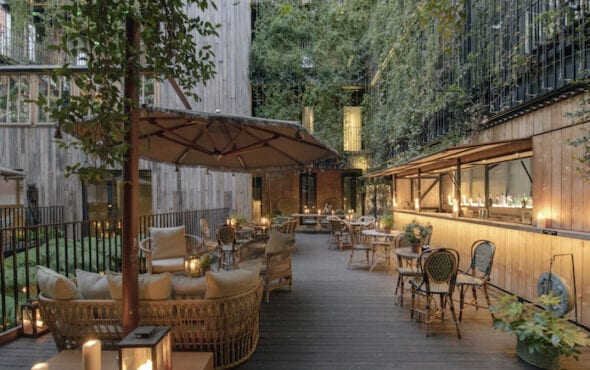 ‘Can I just get you to sign this disclaimer before I give you the key (a real key with a tassel!) to your room,’ says the lady behind the reception at what is probably the most mysterious hotel in London.

Mysterious because you may not have heard of it, even though it’s going great guns and is already a firm favourite with the fashion crowd. Mysterious because you can walk right past it and not realise it’s a hotel (well, a stuffed ostrich with a crown on in the window doesn’t exactly scream ‘check in!’). And mysterious because… well, walk down that long, dark entrance passage towards the Andy Warhol and tell us that doesn’t feel mysterious.

Back to the disclaimer and we’re intrigued. We’ve handed over a credit card for incidentals (or in case you incidentally smash the place up), and we’ve signed the regular check-in papers, so why the disclaimer?

‘In your shower you will find a red button,’ says the receptionist, almost under her breath like she doesn’t want anyone else to hear. So far, so James Bond. ‘If you press the red button and the person in the shower in the neighbouring suite presses their red button at the same time, the glass between you will go clear and you will be able to watch each other showering.’

Which is pure filth, right? And in total keeping for a hotel that has ‘naughty’ written right into its DNA, in an area of London so central it actually touches Oxford Circus but which has managed, over the centuries, to maintain a bit of mystery and quite a lot of naughtiness. It’s called Fitzrovia, which, Latin scholars will tell you, means ‘son of the king’ as it was an area given to one of Charles II’s bastard offspring to keep the wolf from the door and it finds itself just across the road from the sin city of Soho.

The area – Oxford Street up to Euston Road and from Portland Place on the west to Tottenham Court Road on the east – has become the place to eat, not only because of Charlotte Street, an entire stretch of nothing but restaurants, but because of the never-ending openings from Riding House Café through Caravan to overblown Italian, Circolo Populare. Even Giggs’ chippie on Whitworth Street is worth a visit.

Add some great cocktail joints, pubs where all the people working in the BBC up there on Portland Place go and you’ve got the ideal location for a hotel that is starry (‘Is that Jess Glynne having cocktails, just there? Yes it is!’) and showy but not in an attention-seeking kind of way. Just in a totally, because-we-can gorgeous kind of way. There are real Dalís and Clementes, for instance, but you might not notice as they’re just right there on the staircase on your way down to that basement bathroom that has a unisex powder room so big and sexy, impromptu parties have been known to be held here.

Up in our rudie, nudie suite – no two the same – the vibe is sexy and opulent and decadent, with velvets and fringes and gold leafs. And there’s a big roll-top bath looking out onto a wide terrace, that might have people walking past so be careful with the shutters (it’s an exhibitionist’s dream, this place!)

The rooms are individual, so that’s just one vibe. Take the twin penthouses: one is modern and white and decked out with marble and contemporary furniture, the other seems almost like a boudoir from Moulin Rouge, sexy and dark and dangerous. You almost expect to find Nicole Kidman’s frilly knickers hanging from the fringed lampshades.

Downstairs is Waeska, serving ethnobotanical cocktails (try saying that with a mouthful of ethnobotanical cocktails) by bar people who really know their thing, and it sneaks outside into a courtyard for that inside-outside vibe. And if you look up you’ll get a whole load of what might just be the loveliest sun terrace in the whole of London Town, Jurema – it’s won awards and everything – which even has its own plant-packed greenhouse affair for meditation (they have a Spiritual Concierge who can figure out alternative therapies for you!)

Huge tropical plants that were airlifted in block out the glare of the sun on scorcio days and coddle you on colder ones, while jasmine climbs three storeys high. Yopo, the ground-floor South American restaurant, is part industrial part extravagant with ceiling paintings and velvety furniture paired with rusted panels and a parquet floor so distressed it might need a cold hard ethnobotanical (and while the Covid restrictions are still doing their thing has decamped to the Jurema terrace and Waeska).

Oh, and did we press the red button? Of course! Did we see anything? Well, it wouldn’t be quite in the spirit of The Mandrake to go tittle-tattling about stuff like that, now, would it?

The Mandrake has created a post-lockdown festival of culture to support local artists, with live music, screenings and exhibitions.. A full programme of events can be downloaded here.