10 reasons Vienna should be your next LGBTQ holiday 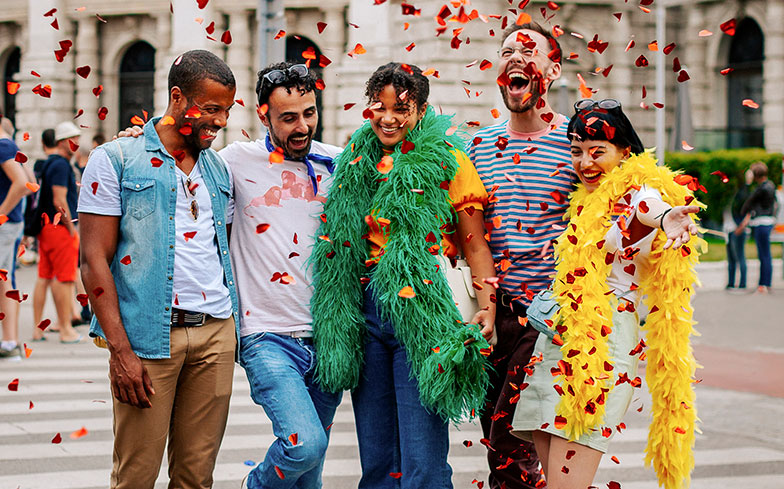 The city is hosting EuroPride 2019.

EuroPride will be heading to Vienna once again from 1–16 June, 2019. For two weeks, the city will become a cultural hub for the LGBTQ community, offering parties, protests, discussions and performances as part of the continuing fight for equality and acceptance. Events already announced include a Pride Beach, a EuroPride Run, a Pride Day at the Zoo, Pride guided tours through the museums, and film evenings. More than one million people are expected to visit EuroPride in Vienna, so why not join them?

It’s the perfect place for a wedding.

Registered partnerships for same-sex couples were introduced in 2010, and last year the Austrian Constitutional Court ruled that same-sex marriage would be legalised across the country from the beginning of 2019. Why not start planning your big day – and the inevitable after-party celebrations – now? Top locations for festive ceremonies include the Albertina museum, the former imperial residence of the Imperial Palace, and even the Vienna Giant Ferris wheel.

It’s been named a top destination for LGBTQ people.

At this year’s Australian LGBTI Awards, Vienna was awarded the prestigious Destination Of The Year award, beating off stiff competition from other gay-friendly holiday favourites including New York City, Thailand, Las Vegas and Los Angeles. Tourism Director Norbert Kettner said the award proves that “Vienna has developed from ‘Hidden Hero’ to a hot spot for the LGBT community”. It’s an unfortunate fact that even in 2018, LGBTQ people must take into consideration their safety and wellbeing when planning a holiday abroad. Fortunately, Austria and capital city Vienna are on the right side of history, with a high level of social acceptance and legal rights for the community. Trans individuals are allowed to legally change their gender to match their identity, LGBTQ people are allowed to serve openly in the military, and same-sex couples will soon be able to marry. This year, Vienna was named the “most liveable city” by The Economist, which ranked on safety and stability among other factors. Popular bars include Felixx Bar, which serves up a great choice of cocktails and wine; Village Bar, which is located near the Naschmarkt; and Kiss Bar Vienna, which also serves food. If you’re after a big night out, head to Why Not on a Friday or Saturday, or monthly party G.Spot which caters for lesbians as well as gay men. Those looking for something a little more tame can visit one of Vienna’s LGBTQ and LGBTQ-friendly cafés and restaurants, including traditional Viennese coffee house Café Savoy on the Naschmarkt, or Fett+Zucker, an espresso bar which has become a permanent fixture on the scene serving vegan, gluten-free and lactose-free options.

Austria is the birthplace of Conchita.

Conchita Wurst put Austria to the forefront of LGBTQ people’s minds when she won the Eurovision Song Contest with her anthem Rise Like A Phoenix in 2014, and subsequently brought the competition home in the following year. She also won the International Icon Of The Year award at the Australian LGBTI Awards earlier this year. If someone as fabulous as Conchita can come out of Austria, then it must be great. You’ll have a ball.

Vienna is known for its balls, with over 450 taking place in the capital city each year, and there are plenty catering specifically to the LGBTQ community. The formal Rainbow Ball, which takes place in January, proved that Viennese Waltzes aren’t just for straight people; February’s Kreativball is the go-to alternative LGBTQ ball; and Miss Candy’s Rose Ball, also taking place in February, sees one of Vienna’s most popular drag queens deliver a sparkling show with dancing until the early hours. Meanwhile, the annual Life Ball is the biggest charity event in Europe supporting people with HIV or AIDS, and regularly draws in big names including Elton John, Whoopi Goldberg, Bill Clinton and Caitlyn Jenner.

There’s plenty on offer for shopaholics in Vienna. As well as the usual chains like H&M and Zara on Mariahilfer Straße, and high-end brands in the Golden Quarter in Vienna’s Old City, there’s a number of dedicated LGBTQ shops for visitors to peruse. There’s gay and lesbian bookstore Löwenherz, which offers thousands of books, magazines and DVDs targeted towards the community. Meanwhile, the ChickLit bookstore offers feminist and lesbian literature, while the Boner Store and the Spartacus XXL-Store offer something for those looking to go a little wild. There’s history and culture at every turn.

Vienna is best experienced on foot, and there’s plenty to see as the city is split into 23 districts, with each having its own attractions and charm. There’s museums galore, classical performances at the Vienna State Opera and by the Vienna Symphonic, and if you go at the right time you might even get to experience the city’s famous balls. As well as being home to plenty of culture, full of life, and welcoming to all, Vienna is also a beautiful city. There’s plenty of history to soak up, the blend of modern and traditional architecture is gorgeous, and if you visit during Pride, there’ll be rainbows galore. Your Instagram will never look so good. You can find more information on EuroPride 2019 here, and read up on what Vienna has to offer LGBTQ people here.