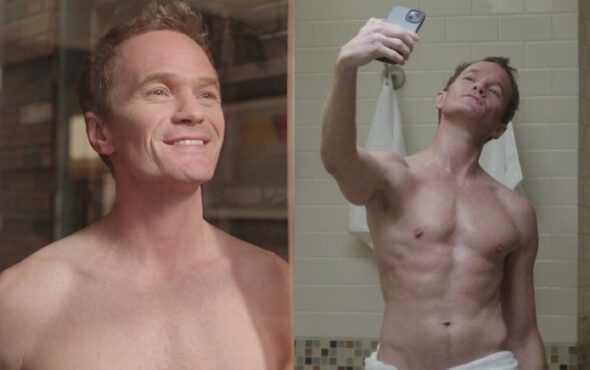 “Overnight, he has to confront two nightmares: losing the man he thought was his soulmate and suddenly finding himself a single gay man in his mid-forties in New York City,” the synopsis reads.

Throughout the season, Michael explores the ever-changing dating world by perusing popular apps like Grindr.

During the third episode, Michael follows the advice of his best friend Stanley James to take a d*ck pic to elevate his profile – which of course, results in hilarity.

In an interview with Page Six, Harris opened up about the scene and how he selected his character’s “special member.”

“Not only did I get approval, [but] I was asked to choose said d*ck, which is harder than you think, no pun intended,” he told the publication.

The How I Met Your Mother star revealed that one of the options was “a flaccid latex phallus”, which he ended up nixing.

“It was not okay because I’m more proud of Michael’s member than something that is mass-produced, that you can purchase online,” he continued.

“We started looking through photos of people who have taken pics of their dongs in locker rooms. And you had to find the right angle and girth and manscapery.”

In the end, Harris praised the final product, stating: “I think we found the right mix… I’m proud of what I’m packing downstairs.”

Since Uncoupled premiered on the streaming service, the series has received praise from LGBTQ+ fans for its comedic storylines and its portrayal of older gay men.

One Twitter user wrote: “I really really love #uncoupled, and please please please give us S2! In the waves of teenage LGBTQ+ stories, the series of middle age gay men is quite refreshing.”

Another user tweeted: “#Uncoupled on Netflix is the closest a show has come to inheriting the SATC mantle. Neil Patrick Harris is the perfect lead for a show that focuses on characters finding love and heartbreak later on in their lives. It is funny, sexy, endearing and gay. Season 2 when Netflix?”

You can watch the first season of Uncoupled on Netflix.