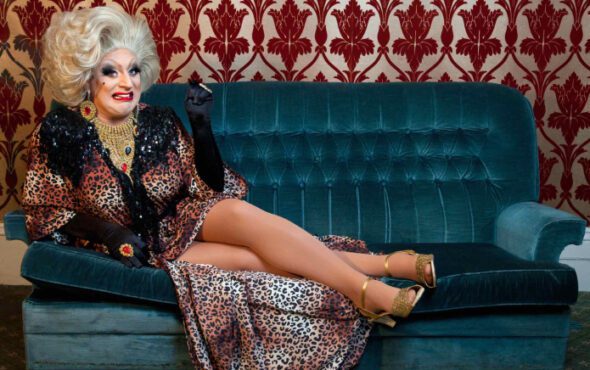 Legendary East London venue The Glory, which was opened back in 2014 by Jonny Woo and John Sizzle, will be taking over the National Theatre’s River Stage on London’s South Bank this weekend, bringing with them a selection of queer cultural delights. Part of London’s largest outdoor arts festival, The Glory’s takeover will run from 15-17 July.

The Big Gay Song Book will kick proceedings off on the Friday night, with a celebration of 50 Years of Pride. Jonny Woo will be joined by pianist and singer Rudi Douglas for a special set of songs that chart our collective journey towards queer liberation, from the UK’s first Gay Pride in 1972 to today. Myra Dubois will then grace the South Bank with sharp one-liners and outrageous asides, peppered with a healthy dose of sing-a-longs. Bringing the night to a close, Hungama will transform the stage into their legendary club night with Indian pop and hip-hop, with performances by Glory Lipsync 1000 winner Bolly Illusion and friends.

On the Saturday, Sue Gives A F@*! and Prinx Chiyo have invited emerging kings and queens to showcase the best in rising Glory talent. Highlights will include a range of Dolly Parton classics and a spot of line-dancing with The Barn Dance. Later on, the rave to end all raves – aka John Sizzle’s Queerdo Disco – promises a spectacle to rival Eurovision.

Drag Life Drawing welcomes crowds of all ages on Sunday to get creative on the South Bank, led by illustrator James Davison, providing some large-scale inspiration. Le Gateau Chocolat and Jonny Woo bring the weekend to a close with costumes, laughs and a lot of music at an Afternoon at the Musicals.

The Glory’s takeover of the River Stage looks like it has something for everyone – the perfect excuse to go and enjoy a sunny weekend on the South Bank!

More information on the full River Stage programme this summer can be found here.