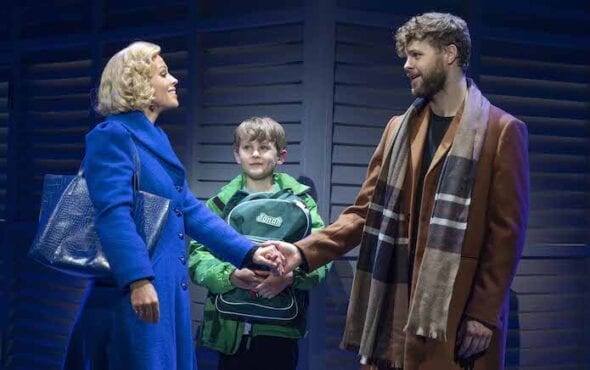 The new musical, based on classic film Sleepless In Seattle, has opened at the Troubadour Wembley Park Theatre.

Given how starved we’ve been of new live theatre in 2020 – this is our first review since March – it’s a challenge to watch Sleepless: A Musical Romance objectively. It wouldn’t really be fair to consider this show outside of the wider context, given the limitations that current circumstances have put on rehearsals and performances. Theatres have only been able to reopen in the last few weeks; it’s frankly amazing they’ve been able to put on a show of this scale so soon.

We were impressed with how well the experience worked. Concerns about tedious queues and one-way systems swiftly disappeared on arrival – sure, there are temperature checks, and details to be registered, and we had to wear masks, but everything else is surprisingly normal. The theatre space may feel a little empty – 400 seats are made available for each performance, which is less than a third of the usual capacity – but it’s a real treat to be part of an audience again, enjoying a communal experience.

Sleepless: A Musical Romance is a stage adaptation of classic 1993 romcom Sleepless In Seattle. It faithfully retells the story of widower Sam (Jay McGuiness) and his son Jonah (played on press night by Jobe Hart); Jonah calls a national radio show to make a Christmas wish, asking for a new wife for his dad. Women across America, including Baltimore-based journalist Annie (Kimberley Walsh), warm to Sam’s candid testimony. Suddenly Sam is inundated with requests for dates – but will he agree to meet Annie?

There’s plenty to enjoy about the show, although it feels like for everything it gets right, there’s something that misses the mark. The orchestra sounds great, but the songs they’re given are fairly middling. The exception is entertaining jazzy ditty Dear Sleepless, performed by a trio of increasingly desperate suitors. It provides moments of much-needed musical merriment in a show where many of the punchlines fall a bit flat. Another number, Now Or Never, is entertaining enough and energetically performed, but it’s milked way too much. It’s surprising that the strongest songs are given to the supporting cast – our leading pair are talented singers but they’re not challenged by anything particularly stretching.

Those expecting any large-scale, show-stopping choreographed sequences will need to manage their expectations – there are dance numbers, but it’s more of the simple, effective variety. Given both Walsh and McGuiness have appeared on Strictly Come Dancing we were hoping for a little more, but it’s still enjoyable to see song and dance numbers on the stage again, even if they’re not on the scale we’ve become used to.

There are moments of the show which are afforded additional poignancy given the current climate. The impact of seeing a couple holding hands is powerful in a way it wouldn’t have been pre-pandemic. In many ways this story – which focuses on physical separation – is the perfect one to tell in these troubled times. Sleepless: A Musical Romance may not land in quite the way we’d have liked, but we still enjoyed an entertaining night at the theatre – and it was great to be back.