Shantay you slay! Here are the 20 best lip syncs in Drag Race HERstory 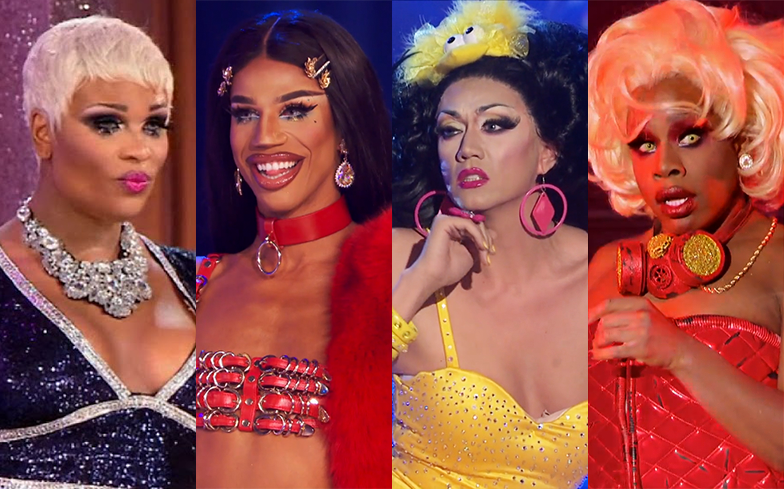 Throughout Drag Race’s monumental 11 year run, the show has provided us with over 100 gag-worthy lip syncs, most of which have catapulted our lace-fronts to Alaska’s home planet Glamtron (Pearl vs Fame excluded).

We’ve already ranked all 16 seasons (including All Stars), and compiled a list of our favourite Snatch Game performances, so in celebration of the season 12 finale this week, we’ve ranked the 20 most sickening lip-syncs in HERstory.

Get your jush below and make sure to strongly disagree with us in the comments – we love to see it.

Manila Luzon was Whitney Houston in this song and we won’t hear any different. When she channeled Alyssa Edwards and sashayed to the back of the stage, it was over for the Tuck. Trinity was fun, and if it were any other queen she most likely would’ve won, but Manila is a lip sync powerhouse. Can you believe this was her first lip sync win since MacArthur Park?

19. Latrice Royale vs Kenya Michaels – You Make Me Feel (Like a Natural Woman) (Season 4)

Latrice Royale showed that she was a force to be reckoned with in this now-iconic Aretha Franklin lip sync, which saw the chunky yet funky performer face-off against the bonkers Kenya Michaels, who chose to strut around the stage like a ballet dancer possessed by Tim Curry’s iteration of Pennywise the Clown. Latrice, however, embodied the song entirely and proved that sometimes, less is more.

Milk’s wacky and irreverent performance of Whatta Man was fun. It was amusing and it was pure Milk. Trinity K. Bonet, however, looked like the lost third member of Salt-N-Pepa as she delivered one of the most precise, smoothest lip syncs in Drag Race HERstory. She embodied the song and made it her own, and not many queens can do that.

Who won? Not Willam

This was the moment everyone waited for. After several intense confrontations, sworn rivals Sharon Needles and Phi Phi O’Hara landed in the bottom two and delivered polar opposite performances to Martha Walsh and RuPaul’s cover of It’s Raining Men. Sharon served camp and Phi Phi served Ciara on acid. Ultimately, both queens were declared safe and Willam was disqualified for ‘conjugal visits with her husband’.

Is this the most emotional lip sync in Drag Race HERstory? Is Brita from New York? Duh. Best pals Raven and Jujubee undeservedly found themselves in the bottom two for the superhero challenge in All Stars 1 and ‘battled’ it out to Robyn’s emotional dancefloor bop, Dancing on My Own. Both queens – who were devastated to compete against each other – didn’t put on much of a show, and cried in each other’s arms instead. Mama Ru was so touched that she declared it a double shantay, which made All Stars the first season to have a top four. Did you like that fact? More incoming!

We’re about to make another bold statement: Trinity K Bonet is the greatest lip sync assassin in Drag Race HERstory. Her first lip sync – which saw the queen embody Chaka Kahn for her iconic disco jam I’m Every Woman – left us gooped, gagged, wigless, slain and so many more drag-related adjectives that we cannot seem to muster up right now because we’ve just watched it for the 96th time and we’re trying to reattach our lace-fronts. Trinity K. Bonet for All Stars 6! Sounds far away, but it’ll probably premiere in three months at this rate.

Texas’ reigning dancing diva Kennedy Davenport brought the fire in this legendary lip sync against Katya. In tribute to her late sister Sahara Davenport, Kennedy jumps into a split off the stage while the Russian hooker performs a back handspring at the exact same time. Life was given! Ultimately, Katya is sent packin’ in one of the most controversial eliminations ever, but like we said, Kennedy brought fire – and a sense of desperation – to this lip sync, which won her a place in the final four.

Over the years, we’ve seen queens flip, kick, split – which we gag over every single time – but Naomi Smalls provided us with something new when she embodied an Octopussy (we googled ‘very flexible creatures’ for this, can you tell?) to RuPaul’s high-energy dance anthem Adrenaline. During her lip sync against Gia Gunn, who also performed brilliantly, the season eight runner-up defied gravity and wiped her taint down the runway. It was everything.

The first of season nine’s showdown for the crown saw lip sync assassin Peppermint battle against Trinity The Tuck, who came to slay with choreography, hairography and an outfit reveal. Peppermint’s performance started off quite subdued, but soon transformed into a whole other beast when she enacted a wig and dress reveal at the same time. After the thunderous applause from the crowd, there was no doubt in Ru’s mind that Peppermint would advance to the top two.

Monét X Change’s fake jump split will go down in history as one of the most gag-worthy things to have ever happened, ever. If we had access to Harry Potter’s resurrection stone, we’d revive Leonardo Da Vinci and force him to paint a portrait of Monét mid-jump so it could be hung in the Louvre for all eternity. Do you get the gist already? Do you understand? It’s iconic.

RuPaul has gone on record to say that this is his favourite lip sync ever, and we get it. Season five contestants Alyssa Edwards and Roxxxy Andrews brought choreography, energy and copious amounts of hairography for a rendition of Willow Smith’s dance anthem, Whip My Hair. Roxxxy changed the motherfucking game when she unveiled a wig underneath her wig, spawning an iconic gif of Michelle Visage (that we use about three times a week) and inspiration for future challenges and performances.

The best lip sync of season six saw fan-favourite contestant Adore Delano face-off against lip sync killer, Trinity K. Bonet. After witnessing Trinity brutally murder Milk and April Carrion in her two previous showdowns, Adore was understandably shaking in her Mortal Kombat, black panther-inspired boots. But was she queen really gonna fuck up a Paula Abdul song, in front of Paula Abdul, her former judge on American Idol? In the words of Michelle Visage, “NO!”

Coco Montrese and Alyssa Edwards’ feud from the outside world memorably played out during season five, and this lip sync served as the conclusion to their years-long rivalry. Alyssa gave one of her most sickening performances to date, performing jump split after jump split, but Coco emerged as the winner after mouthing the fast-paced lyrics and twirling the house down. Again, this one could have gone either way.

Manila Luzon is batshit fucking crazy in this lip sync, and she’s dressed as Big Bird. Don’t you just love drag? To this day, we still don’t understand why Delta Work chose to perform a Donna Summer song to her bracelet – and we never will – but we love that she did, and we’re still obsessed.

After spending a record nine consecutive weeks in the top, Jinkx Monsoon landed in the bottom two for the first time against Rolaskatox ‘nemesis’ Detox, who was determined to advance to the final three with the two other members of her Plastics-esque clique. Jinkx gave it everything she had, grinding and booby-popping, and surprised just about everyone when she knocked Detox out of the competition. It’s just legendary.

The Princess was fine in this performance, but Dida Ritz… girl. Determined to bring justice to the late Natalie Cole’s classic love anthem in front of Natalie Cole, the fierce competitor stomped the main stage in her drag gladiator-inspired couture and delivered one of the best individual performances Drag Race has ever seen. Honestly, we get chills every time we watch this because like Latrice Royale said, “That is what a lip sync for your life is baby! That is high drag at its finest.”

When the sudden death lip sync showdown for the crown was announced for season nine, most assumed Shea Coulee would still walk away with the win. She’s a fantastic performer – as witnessed during Category Is – and won four main challenges, a feat only accomplished before by Sharon Needles and Alaska (at the time). But she was not prepared for Sasha Velour, who came equipped with her groundbreaking rose-petal extravaganza; subsequently raising the bar for future lip syncs on the show. Without them, we wouldn’t have been introduced to Asia O Hara’s butterflies. Thanks Sasha.

This was the gay Superbowl of 2019. After bombing Snatch Game, Drag Race’s most important challenge, Brooke Lynn Hytes and Yvie Oddly embraced their inner Cirque de Soleil in a sickening display of acrobatics and ruveals for Demi Lovato’s Sorry Not Sorry. It went viral on social media, attracting praise from lip sync powerhouses such as Kennedy Davenport, Alyssa Edwards and Tatianna, and almost caused an earthquake of epic proportions after gays across the globe let out a collective “YAAAAAAS!”

1. Alyssa Edwards vs Tatianna – Shut Up and Drive (All Stars 2)

When we saw Alyssa Edwards and Tatianna walk down that runway in matching corsets, with that look of fiyah in their eyes, we knew some Buffy-style slayage was about to occur on the main stage. It’s the lip sync we show our heterosexual pals when we try and convert them to Drag Race, and pretty much every time, it works. It’s absolute perfection and Drag Race as its best.