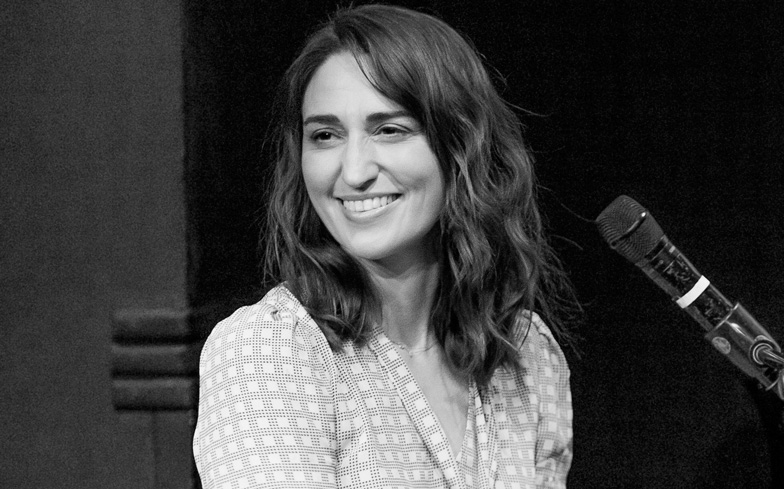 When six-time Grammy nominee Sara Bareilles needed a break from producing a new album and heading out on tour, she looked for something new to inspire her.

Now, a Tony nominee for writing a best-selling Broadway songbook and with a continuing smash-hit musical in New York City, touring across America, and soon-to-be in London, it’s safe to say what came maybe wasn’t quite as she’d first expect.

But what makes the story of a young girl that works in a pie shop one of the most successful musicals of the last five years? Did the uprising of the #MeToo movement influence her writing? And where does her rooted allyship to the LGBTQ community come from?

Would you agree that for someone who has had such a successful career in music, your involvement in a stage musical was a risk?
Totally. It’s a good quality of mine and a bad quality of mine that I’m very shortsighted. Like I’m really only looking at the thing that is directly in front of me. I was feeling sort of stagnant in my artistic life, anyway. I love the records I’ve made and I’ve loved the tours I’ve gone on, but it really is a very cyclical engagement. You write a record, you make a record, you go on tour, you come home and you do it all over again. The things that are so magical start to feel very mundane and uninterested if you’re not staying creative about how you walk through the world as an artist. I was craving something that shook me up in that way, so my motivation for being involved was never about it being successful, it was so internal. It was about trying to deepen myself as an artist. The following of the movie Waitress is huge.

When you first thought that this could work on stage, what sold you from the start?
I didn’t know the film going into this. I knew the poster of the film, that was undeniable, but then I didn’t watch the film until I had had a meeting with Dianne Pollise our director and she told me that this was in development and was I even interested. It was posed to me as as an exploration – like, let’s try this out and see if it works. I was really intimidated. The idea of writing an entire score seemed almost impossible to me, so we went on the journey together and I slowly but surely met all of these incredible collaborators. I watched the film, got very intimately aware of Adrianne’s (Shelly, screenwriter) world and then the challenge was finding where to liberate from Adrianne’s vision and what lives on the film. We were initially working from the screenplay and there’s things that don’t quite translate to the stage, obviously – different medium. It was this long puzzle and extended exploration of trying to preserve what was so precious about her and the film, and getting to expand and deepen moments.

So how did you begin to write for the stage rather than write as artist Sara Bareilles?
The only way I knew about getting inside the psychology of character is what I describe as radical empathy. I was just trying to really imagine myself as these people and I started with Jenna (the lead character) as she felt closest to me naturally. Then it was this amazing discovering of how I could relate to the eccentric love-sick sidekick, the abusive husband. Like, how do you make these people dimension and have souls and really a deepness to their character? My style of writing is less about exposition and moving the plot along, and a divine into the psychology of each character.

How much did the world around you influence your work? Did the #MeToo movement influence any part of your writing?
We were pretty much all-but done by then and were on stage, but because of the subject matter and we were an all-female creative team, these were things that were important to us and to be delicate about. One of the things I love about being an all-female creative team is that it was an organic decision and not a casting agenda. We actually were well into the making of the show when somebody asked if this had happened before. It not being on purpose is that it wasn’t intentional, and my hope for women in every industry is that we get past the gender identification at all and get to be the right people for the job. Did the experiences from your music or personal life add to your writing?
I can relate to being the only woman in the room almost exclusively in my life. That is starting to change, but I have also worked with wonderful men. What I don’t want to do is create a sentiment where no boys are allowed. We had wonderful male collaborators and one of our producers is a man. We had beautiful, sensitive, loving male counterparts. I do feel that sense of feeling small and oppressed in some way feeds into it in my life as a female artist. There’s lots of times I can remember I felt small because I was a woman.

You’ve spoken about the power of genderneutral pronouns and how powerful they can be in the music industry. Why do you believe in this type of writing?
I don’t know if I feel they’re becoming useless but I do think that fundamentally we’re just human souls walking through the world, so I have no judgement on if someone identifies more strongly or less strongly with one version of how we call each other. I think pronouns can be helpful as a shortcut at times, but if someone takes offense to it I would never want to impose that upon them. I think that fundamentally, what I hope to further in the work that I do, is a sense of empathy and compassion. That we all in our DNA are made of the same stuff and go through this human experience and all relate to these emotions without a pronoun. We relate to our heartache, our family, our life experiences in very similar ways. Where it gets tricky is where we want to over identify. When we want to distance ourselves from a community. That’s where it can be challenging because, what I think, we’re all more the same than we think.

Is that where your ‘It was never about he’ viral moment came from where you came out?
It was about an entity, but I had no idea it was going to get the response it did. It was awesome!

When did you realise you’d possibly just come out, or did you never clarify?
I never clarified it. I don’t still think it needs clarification. The song is written about the record label which is a collection of people. Some men and some are women. Y’know, the oppressive forces don’t have pronouns.

Is it right you wrote your hit song Brave about your queer friend trying to come out?
Yeah, it was related to that. I had a good friend who was really struggling as a grown up and was sort of a love letter to this person. I had no idea that the song would become what it became, but that’s been a huge point of pride and gratitude for me.

Do you now realise how big your voice is for those that often can’t find the words at that point in time?
I feel like that’s the reason I’m walking around on earth is to just be a vessel. I really don’t claim ownership of anything that comes through. I feel like I got lucky and get to share what arrives from wherever it comes from. I’m so grateful for the arts in this way because I do find them to be cathartic and soothing and sometimes giving a voice to things I usually wouldn’t know how to.

Minority voices on Broadway are thankfully on the rise. How important do you believe having these stories and voices in a mainstream arena is?
It’s the most powerful thing because it’s to do with representation. It’s to do with the world that it actually is. What I find amazing is that it’s started to feel more and more strange when you don’t see representation. Personally, as a white woman, I’m noticing when there aren’t people of colour or aren’t LGBTQ voices. When we are not being representative as that’s not what my life looks like. My community is very diverse and I get excited to be part of projects that are, in whatever ways they can, inclusive.

Is there a lack of interest from the audience then for queer stories on stage?
There’s enough gay people to play these roles. I think it’s a continued sense of pushing. It’s a continued sense of striving for that and it is out there and it is happening. Sometimes, not to say that you should just be patient, but it does take time for things to arrive and show up. I sense that there’s a deep interest in that, even in my limited experience in the theatre community. I feel optimistic that it will continue to move in that road, even if it’s not as quickly as some would hope.

Did you consider writing a gay character for this show?
Yeah, we’ve talked about it. Yeah, we’ve talked about Don and… the tricky part with Waitress is that it’s an adaption of someone who is not with us anymore so we want to honour the story Adrian Shelley wanted to tell. We do feel delicate about making big changes as we care about preserving her vision, but it’s certainly something we’ve had and definitely open to. We all agree that we have to evolve as a creative force.

So if we speak to all the queer people in London, how much do we need to get you to come star as Jenna in London like you did recently on Broadway?
It’s not out of the realm of possibility. It’s not going to happen right away. I’m not going to open the show here, I’m so sorry to say. I know, but that’s as I’m finishing a new record. I will be focused on the release of that, and hopefully a good thing or everybody. I’ve got some songs for you guys.

Related: Hugo Weaving teases his idea for a Priscilla, Queen of the Desert sequel

Top five gay icons that you’d put into a perfectly baked pie. Who is first?
I’m beginning with Sir Elton John. We have to have RuPaul. Who else? Madonna. That’s three. I don’t know if they’re gay icons but Tegan and Sara because they’re fucking amazing! And… why is this taking so long?

We should put you in there, you are a gay icon.
I’ll fucking put that on a t-shirt right now. That’s so fucking cool! I’ll credit you for adding my final ingredient.