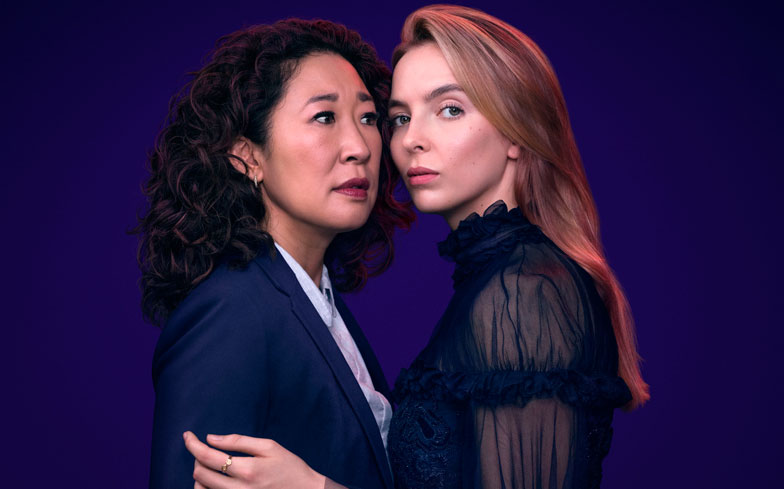 The first season of Killing Eve took the world by storm and left audiences eagerly awaiting its return for a second outing.

Alongside the dangerous game of cat and mouse between investigator Eve and murderess Villanelle, fans began to question if the show could explore the sexuality of its leading ladies. And could that possibly mean a romance together?

It’s a discussion that the show’s star, Golden Globe winner and SNL host Sandra Oh was quick to dismiss, saying to GAY TIMES that the idea is sadly not a “focus or a message” for the show.

“You guys are tricky because you want to make it into something… but it just isn’t,” Sandra – who plays MI5 security officer Eve Polastri – said on the phone from New York.

“That’s also why I think sexuality and discovery of the wider reaches of sexuality is the theme of the show – why it’s interesting to people. It’s not one thing or another.”

Related: Here’s when the second season of Killing Eve premieres in the UK

And for Sandra, Killing Eve’s approach elsewhere in the show is perhaps what connects so well to LGBTQ audiences: “The fluidity, even in the questioning that I know Eve really really carries, is what I think people can truly relate to. We are not saying one thing or another because people are not one thing or another.”

She pauses: “I’m only going to focus in on the truth of what we are doing.” However the same can’t be said for her British co-star Jodie Comer, who plays the murderous yet likeable Villanelle, who explains that her character’s openness to life is something she thinks has connected with the audience.

And while any hint of a romance between the pair is off the table, Sandra is clear that if anybody can feel empowered or represented by Eve or Villanelle, then that’s “the best”.

“It’s not like I don’t have a consciousness about it but again, if what we’re doing regarding these characters reaches people who have not felt represented in that kind of what, it’s absolutely the best mark to hit because you just want to connect with people.” Jodie added Villanelle’s sexuality was actually never explicitly discussed during the development of her character.

“I think what I love as well is that Villanelle’s sexuality was never discussed – it was who she was and I love that,” she tells us. “It is who she is and that was that.” Last year, Killing Eve received universal acclaim and was subsequently nominated for Outstanding Lead Actress in a Drama Series at the Emmy Awards, making Sandra Oh the first actress of Asian descent to be nominated for the award.

Killing Eve is based on the Villanelle novellas by Luke Jennings. The first season was written by Fleabag’s Phoebe Waller-Bridge, while now Emerald Fennell takes over as the show’s new lead writer.

You can watch the trailer for season two below:

Killing Eve returns to the UK for its second season on June 8. The first series is available as a boxset now on BBC iPlayer.

We have a winner baby! Here’s how fans reacted to the finale of Drag Race Down Under season one