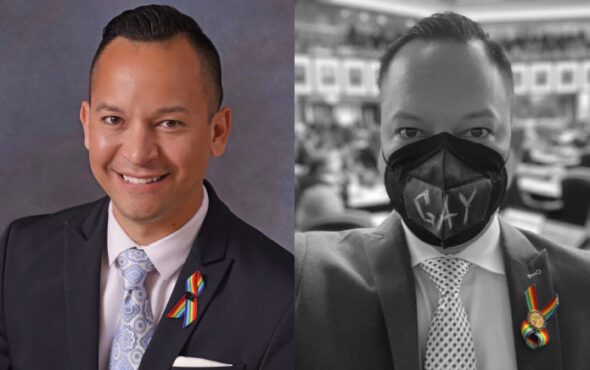 “Politicians are less inclined to enact legislation that discriminates or targets the LGBTQ community when we are amongst them, when we are their colleagues, when we are their siblings, their children, their neighbours and their co-workers, being out and being authentic about who we are,” says Rep. Carlos Guillermo Smith.

In November 2016, the 41-year-old made history as the first openly LGBTQ+ Latin person elected to the Florida Legislature.

Since then, the Democrat has used his position in the state’s House of Representatives to advocate for LGBTQ+ rights – which most recently has been an uphill battle against the ‘Don’t Say Gay’ bill.

The legislation, which is officially called the Parental Rights in Education bill, seeks to restrict “classroom discussion about sexual orientation or gender identity” in primary schools.

“We call it the ‘Don’t Say Gay’ bill because it prohibits classroom instruction on sexual orientation or gender identity for certain grade levels, which, you know, sends a really terrible message that conversations about LGBTQ people are somehow inappropriate or even dangerous to be had in front of our young people,” Smith tells GAY TIMES.

Republicans hold a majority of 78 seats to the Democrat’s 40 in Florida’s House of Representatives, which passed ‘Don’t Say Gay’ by a vote of 69-47 on 24 February.

“Republicans are in the majority, both in the Florida House and the Florida Senate, and they occupy the governor’s mansion as well,” Smith explains. “So the numbers as far as the votes are stacked against us, but we have people power. The public is on our side. A majority of Floridians oppose this proposal that seeks to censor conversations about LGBTQ people in our schools. It’s not solving any problem that currently exists.”

I want every member of the LGBTQI+ community — especially the kids who will be impacted by this hateful bill — to know that you are loved and accepted just as you are. I have your back, and my Administration will continue to fight for the protections and safety you deserve. https://t.co/OcAIMeVpHL

As an openly LGBTQ+ legislator, Smith says discriminatory bills like this are “very personal” to him.

He explains: “I have survived anti-gay hate violence from when I was a college student. I, you know, from my own lived experience, I understand the consequences of homophobia and transphobia.

“The [‘Don’t Say Gay’] bill is proposing to censor conversations about people like me in the classroom. So of course, it’s personal, because it sends a message to young people that conversations about LGBTQ people are dangerous, they’re not dangerous,” Smith continues. “And that’s, you know, I just, this idea that we can’t take personal what is obviously a very personal attack on a community of historically marginalised people, I think, is ridiculous and offensive.”

LGBTQ+ activists are fearful that ‘Don’t Say Gay’ could totally limit any discussions or lessons on identity, the community’s history and the oppression it has faced – prompting its nickname.

Rep. Joe Harding, the Republican who introduced the bill, told lawmakers on the House floor that it exists to create “boundaries at an early age”.

“Creating boundaries at an early age of what is appropriate in our schools, when we are funding our schools, is not hate,” he claimed. “It’s actually providing boundaries, and it’s fair to our teachers and our school districts to know what we expect.”

Those who know me, know I always wear @orlandoribbons created by @BenJohansen9 in remembrance of the 49 taken at @pulseorlando. Today, I wore the ribbon upside down as a symbol of the LGBTQ community in distress…because #DontSayGay is yet another attack on our community. 🏳️‍🌈🏳️‍⚧️ pic.twitter.com/rIal6Q3Dns

Seven Republicans crossed party lines to join Democrats in opposing the legislation in Florida’s House, something Smith tells GAY TIMES “was not expected” and “sends a message to the Florida Senate, also, majority Republican, that, you know, this is really, really bad legislation.”

Smith, who thinks the governor has an “extreme agenda”, believes those supporting the legislation are “conflating discussions or instruction about sexual education with conversations about an entire community of people, LGBTQ people.”

The Floridian continues: “I’ve heard many of the bill’s sponsors, in many different ways, in response to questions about the bill or during media interviews.

“They talk about how, ‘Well can’t we all agree that we shouldn’t be teaching some of these young students sexual things and having instruction on sexual intercourse’. But that’s not what’s in the bill.”

‘Don’t Say Gay’ now heads to the aforementioned Senate, where it is expected to pass and ultimately be signed into law by DeSantis, who has heavily suggested that he supports the bill.

“You know, the reality is that LGBTQ Floridians like myself, we are a normal and healthy part of any society and any school,” Smith says. “We exist in conversations about us and about who we are, about what our families look like. They’re not dangerous. They don’t need to be censored and suggesting that they are dangerous or inappropriate, as Governor Ron DeSantis has, sends a terrible message to some of our most vulnerable youth who really just need our support.”