Exclusive: Margaret Cho says Fire Island “lets everybody in on the secret that being gay is better” 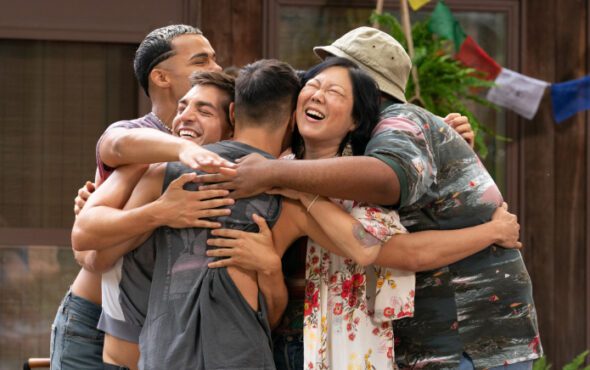 The Emmy-nominated trailblazer, whose iconic credits include All American Girl, Drop Dead Diva and 30 Rock, stars in the upcoming gay rom-com as Erin; the “gay elder” and “mom” to the gang who annually hosts them at her Fire Island condo.

Although Erin was originally written as a man, Cho reached out and requested a part in the film, which resulted in writer and star Joel Kim Booster revamping the character and their background.

“They were trying to figure out where I would fit in, because they really wanted to put me in the movie,” she reveals in the brand new issue of GAY TIMES.

“That is so unexplored in any sort of media,” Cho continues. “So, we have a rare glimpse into these lives that are really their universal themes, but also so invisible in mainstream society.”

Directed by Ahn, the comedy follows Noah (Booster), Howie (Yang) and their eclectic circle on their annual trip to the famous gay escape destination off the southern shore of Long Island.

For its celebration of LGBTQ+ culture and exclusion of queer trauma elements, Fire Island has received near universal critical acclaim. Cho jokes that films centering on the HIV/AIDS epidemic and homophobia are the “primary colours” of queer cinema, while stressing the need for more colours in our “palette” that showcase queer joy.

“You need to have the subtlety of the lavender, the grey, the hot red of these underwear parties. Everybody’s naked in the movie – except me, even I’m wearing a bikini, so that’s saying a lot,” she explains.

“It’s very sexual without making it unwholesome. There is no judgement about the sluttiness. The sluttiness is actually a value, because we value experience over this false idea of what purity is.

“It really lets everybody in on the secret that being gay is better! That’s why people are just scared of it, because it’s better!”

“It was all gorgeous queer joy. We laughed everyday,” she remembers.

“Everyday outside of my trailer, it was Matt Rogers and Bowen Yang doing different monologues of Tiffany Pollard from I Love New York or Real Housewives, like full renditions of Real Housewives scenes, full monologues.

“It’s very, very much that. Full dance sequences. There was a lot of screaming. We just really had the best time. We just laughed and screamed and we loved it.”

You can read our full interview with Margaret Cho and the cast of Fire Island via the GAY TIMES app, Apple News+, Readly, and Flipster.