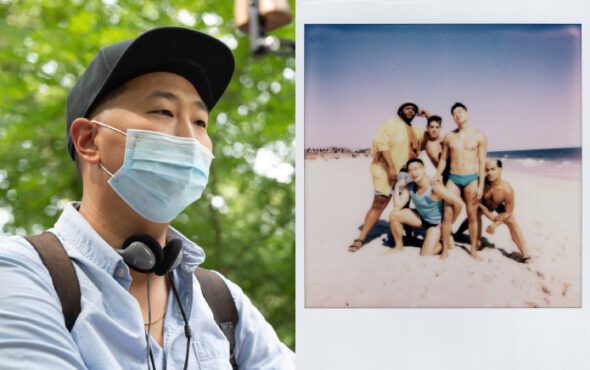 The upcoming rom-com follows Booster’s character Noah and his small group of friends as they head to the famous gay escape destination for a weeklong vacation.

Ahn, director of acclaimed dramas such as Spa Night (2016) and Driveaways (2019), tells GAY TIMES that he and Booster connected years before they collaborated on Fire Island because “meeting other gay, Korean-American people” in the industry is an “art-form”.

“I don’t think he even had the script yet. But then a few years later, I heard from him saying, ‘I’ve got this project,’ and I was just really moved by it,” he recalls, before commending the screenplay for its positive depiction of Asian-American friendships. “To me, that was just so badass and I really wanted to do it.”

Fire Island’s premise was directly pulled from Booster’s experiences with the Pines, as well as Jane Austen’s classic romance novel.

Ahn says the comedian “knew” that a modern – and queer – version of the novel would “resonate” with viewers due to its themes, such as friendship and chosen families.

For Ahn, it felt “authentic” for the film to focus on the friendship between Noah and Howie, played by Saturday Night Live alum and Booster’s best friend Bowen Yang, calling it “the bros before hoes kind of thing”. Although Fire Island brilliantly portrays the beauty of being a member of the “rainbow mafia”, one of the central themes is how queer people oppress one another.

In his cover interview for GAY TIMES, Booster says: “When we’re all together on an island, no straight people, nothing to oppress us from the external, how do we oppress each other?

“It was really important for me to show that dichotomy of both the closeness that comes from chosen families and also the toxicity that can come when we’re suddenly emboldened by the things that, for years, gay culture has lifted up as important: body image, wealth, race.”

Ahn “loved” how the script acknowledges inequality within the LGBTQ+ community, saying it’s “critical of a certain conception” of gay culture.

“As someone who had never been to Fire Island, but had heard a lot about it, I was worried when I first got the script thinking, ‘Oh, is this just going to play into these things?’” he says.

“But actually, it’s really trying to call them out as bad, and then also find a new way to define a Fire Island experience: one that’s more inclusive, one that’s more based on friendship and organic connections.

“So, I really love how the script is really bold about that.”

It was important for Ahn to hire actors whose sexuality matched their characters because it adds “nuance and humanity” to their roles.

“There’s nothing like a lived experience that can really colour a performance so that it feels really authentic. For me, it was also just a great opportunity to work with queer talent that hasn’t necessarily gotten opportunities to headline movies,” he says. “I love Conrad Ricamora. He’s so good in this and to give him this kind of role, he’s Mr. Darcy, you know? That’s such a rare opportunity to play that character. Joel and Bowen, they’re known for their comedy. I really wanted to work with them on this so that they could show off their dramatic chops.

“Margaret, just such an icon. It’s so great to see her in this as a mother figure, as mentor. It just felt really meaningful. I think with the cast in this movie, it was a really great way to give queer actors opportunities to show off, and say how talented we are as a community.”

Fire Island premieres 3 June in the UK on Disney Plus. The film has been met with universal praise for Booster’s script, performances and celebration of LGBTQ+ culture.

You can read our full interview with Andrew Ahn and the cast of Fire Island via the GAY TIMES app, Apple News+, Readly, and Flipster.