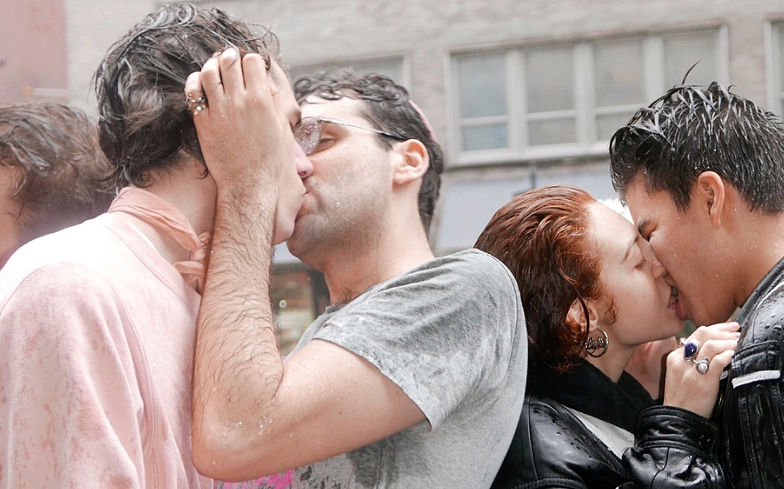 It’s been nearly a year since the first reports of an anti-gay purge taking place in Chechnya emerged.

Last year, Russian newspaper Novaya Gazetta broke the story that up to 26 men had been killed as part of an alleged anti-gay operation in the republic.

There were also chilling reports of young gay men being murdered by their own family members, as authorities told parents to kill them – or they’ll do it themselves.

The Kremlin and Chechen government have both repeatedly denied allegations that gay men are being detained and tortured in the region, but Chechen leader Ramzan Kadyrov has never kept it a secret that he is staunchly anti-LGBTQ.

Similar breaches of human rights against LGBTQ people have also taken place across other ex-Soviet countries, including Azerbaijan, Tajikistan and Uzbekistan.

Action advocacy group Voices4 have taken matters into their own hands with a series of protests to apply pressure on these anti-LGBTQ regimes.

Their latest protest – in partnership with RUSA LGBT – saw them hold a mass kiss-in outside the Uzbek consulate in New York.

“Appealing to ‘traditional’ values, the governments of Uzbekistan, Tajikistan, and Azerbaijan have been abusing their respective powers, rounding up, detaining, assaulting, and physically abusing LGBTQIA+ people,” they stated.

“In some cases, law enforcement have started registering LGBTQIA+ people, blackmailing, and torturing detainees, forcing them to give up the names of their LGBTQIA+ friends and peers.

“We at Voices4 utilised this historical protest format to demand the governments of Uzbekistan, Azerbaijan, and Tajikistan immediately stop the genocide.”

An anonymous queer asylee from Uzbekistan had a statement read out at the kiss-in, according to Dazed.

“We all are here to protest ill treatment of LGBTQI communities in former Soviet Countries,” they said.

“As someone who is originally from Uzbekistan and has gone through immeasurable pain as for being different, I can say that it really is hard for our community to exist in those parts of the world.

“In Uzbekistan, there is still a sodomy law, one of only two countries of ex Soviet Union that still maintains sodomy law. An openly gay man can end up in prison for three years. An individual can be shunned (best scenario), or hurt or even killed by family members or community for bringing disgrace. That’s why I ran away.”

They added: “When I came to New York I was 28-years-old. With a certainty I have to say that I have not lived those 28 years, I simply have existed. I started to live after coming to New York.

“In some countries of the world we can be killed for simply being a member of the LGBTQI community, in many others we can be imprisoned, or attacked by the mob.

“Even in the USA hate crimes against us have grown. We might be different in many ways; race, religion, nationality, social status, etc. but the time has come for us to unite and fight for our rights around the world.”