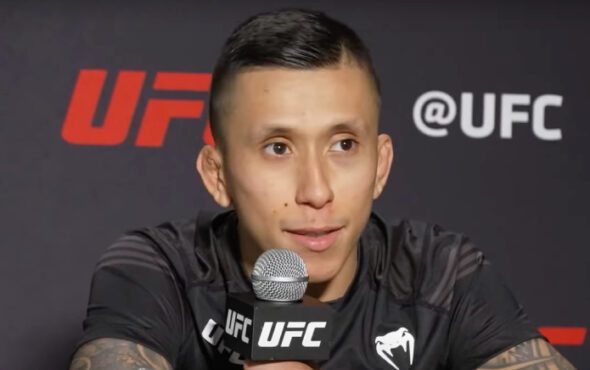 On 1 June, the flyweight prospect celebrated the beginning of Pride Month by showcasing his custom made uniform – which featured his last name in rainbow embroidery.

“Pretty sick UFC is letting us rep for pride month! Get your pride gear @ufcstore,” he wrote alongside the rainbow flag emoji.

Shortly after uploading his tweet, fans replied to the professional fighter and thanked him for his support of the celebratory month.

One user wrote: “Bad ass! Thanks for being so cool.”

Another user replied: “Good stuff man. It’s good to be open-minded and show support for others even in small ways.”

However, amidst the postive tweets was a sleuth of negative comments – which prompted a follow-up tweet from Molina.

“To all the dudes sliding in my DM’s, I’m a straight guy but pshhh I’m flattered,” he tweeted. “For all the homophobic dudes upset by me repping pride month on my fight kit y’all some fruit cups.”

After competing in his fight on 4 June, the 24-year-old was asked about the negative feedback he received for wearing Pride merch.

Pretty sick the @ufc is letting us rep for pride month!! Get your pride gear @ufcstore 🏳️‍🌈👊 pic.twitter.com/nEbJZSuLWr

“Judging someone, and then trying to justify it with religion, and saying all sorts of spiteful, hateful shit is crazy to me. it’s mind-boggling.”

He went on to say that he was “honestly shocked” by the amount of pushback he received from fans.

“I picked the colors because I thought it looked cool, and then also it supports a good cause. I’ll support anything of a community that’s been oppressed and ostracized for some time for something they can’t help. I’ll get behind any of that,” he continued.

“I just thought in 2022 people would be a little more open-minded and not pieces of s**t, but I guess I was wrong. It’s just crazy to me.”

Jeff Molina goes *off* about the negative comments he received for wearing UFC’s pride month shorts.

“I just thought in 2022 people would be a little more open-minded and not pieces of sh*t. But I guess I was wrong.”#UFCVegas56 | Full video: https://t.co/mOxnqIFGCb pic.twitter.com/aKeVUUeXyg