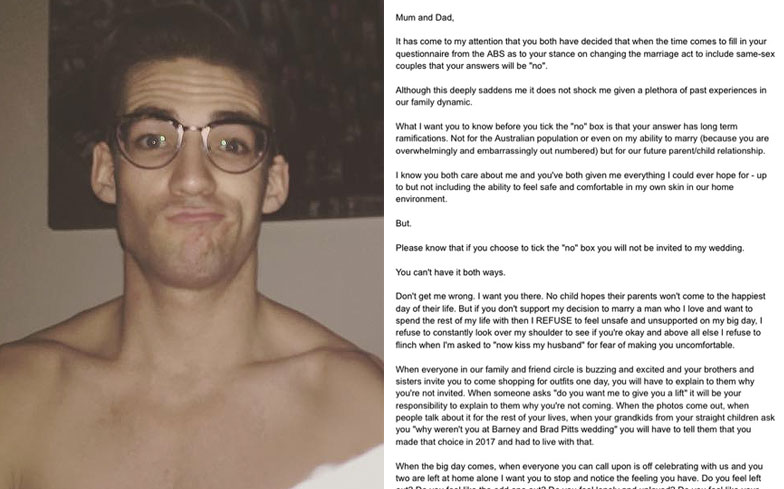 Actor Barnaby Reiter posted the letter in the hope of supporting others in Australia’s marriage equality debate.

“I know you both care about me and you’ve both given me everything I could ever hope for,” it begins, “up to but not including the ability to feel safe and comfortable in my own skin in our home environment.

“But. Please know that if you choose to tick the “no” box you will not be invited to my wedding. You can’t have it both ways.”

Barnaby continuing: “I refuse to flinch when I’m asked to “now kiss my husband” for fear of making you uncomfortable”.

“When everyone in our family and friend circle is buzzing and excited and your brothers and sisters invite you to come shopping for outfits one day, you will have to explain to them why you’re not invited.”

He later directly addresses why his parents won’t be in his wedding photos, and them both when such a day arrives to take in that feeling of loneliness and difference – a feeling he has when his parents explained they’d be voting “no”.

Barnaby later wrote that he’s unsure he’d continue a relationship with them both if they decide to not vote “Yes”: “If you are not a part of my wedding, you will most likely not be a part of my life from then on.”

“I’m currently in two minds about how I feel. One part of me feels like a weight has been lifted and this process has been a wonderful learning experience where now I don’t have to censor myself around anyone (especially people who don’t deserve it),” Barnaby told Gay Times.

“I only fully realised recently that they are in the wrong and what on earth was I doing sacrificing my integrity and wellbeing to make THEM feel better about their bigotry?

“Then on the other hand, I’m furious that the Australian government even put us in this situation in the first place! It was always my goal to have a similar conversation with my parents leading up to my wedding but this really forced me into a corner sooner than I was necessarily ready for.”

Later explaining that his parents are yet to respond to the letter: “I mean I don’t think we have any risk of them finding it on Gay Times, but I anticipate their response time may quicken when they notice I’m not protecting them, their image and their backwards views at my own personal expense anymore.

“My parents are very intelligent and educated folks: working on boards at major Australian universities and schools as well as owning their own business’ – I assumed that they would have the intellect and empathy to stand by me but when they asked recently to “have a conversation so they can explain their vote”. I had to draw the line and realise that I can convince anyone (let alone my own parents) to love me unconditionally.

“That’s not an effective use of my time and energy. And frankly it’s their loss – my wedding is going to be like the opening to Sex And The City 2 on steroids and my children are going to be Tony award winning microbiologists!”

“My only desire for sharing the letter was to make sure if anyone was feeling the same way that they can know we no longer have to sacrifice our own hearts and minds in an effort to protect and placate those who are in the wrong.

“I know this next chapter in my life will be a happier and healthier one knowing that I am only surrounded by people who want the best for all of me.”

A decision on Australia’s same-sex marriage debate is expected in the coming weeks.