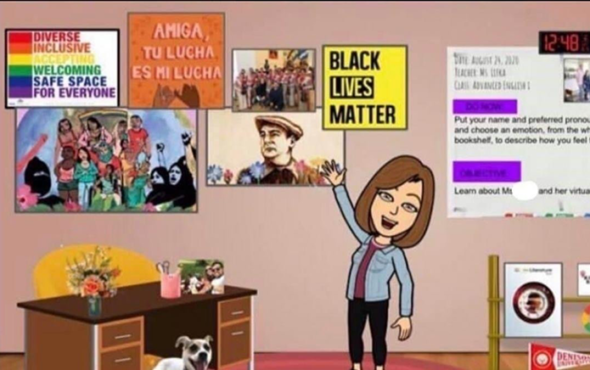 A teacher received multiple complaints following the circulation of her virtual classroom on social media.

Taylor Lifka, an advanced English teacher at Roma High School, decided to create a comforting virtual classroom environment for the kids she taught. Due to the pandemic, students have been learning from home to prevent transmission of COVID-19.

The virtual classroom featured banners, Black Lives Matter posters and signs in support of the LGBTQ+ community. The digital space featured typical classroom furnishings including a desk, a shelf of books and, unexpectedly, a dog lounging on the floor. An image of this virtual space was circulated online by a Texas Republican candidate.

Marian Knowlton, who is standing as a Republican candidate for Texas’ 31st district, disapproved of the messages Lifka presented in her classroom. Following Knowlton’s online post, parents complained about the posters and the teacher was placed on administrative leave last Sunday.

Following this dismissal, an online petition circulated earlier in the week calling for Lifika to be reinstated. The petition appeals to potential signers calling the removal of the English teacher as “morally wrong”. It goes on to criticise the actions taken towards Lifika, saying: “Please sign this petition to let the school district know that inclusivity and acceptance are not taboo ideas that deserve censorship.” The ongoing petition has be signed by over 33,400 people.

Speaking to NBC News, the 25-year-old teacher explained how the events made her feel. “Our nation is in a really divisive state right now, and so when something like this comes out that a teacher is being placed on administrative leave because of parents’ concerns over teaching tolerance in the classroom, that’s a bigger question,” she told them.

On Wednesday the teacher was told the leave she had been placed on would be revoked. In a quote given to NBC News, she outlines how her action in the virtual classroom have stirred up some political tensions. Lifka says she was told by the school’s administration that the town were “not ready” for her liberal views.