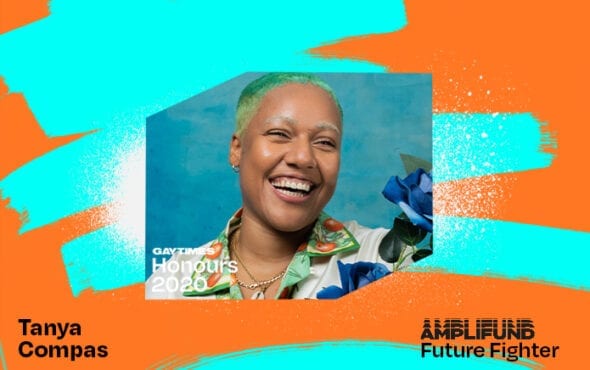 Tanya Compas has been named the recipient of the GAY TIMES Honour for Amplifund Future Fighter.

The youth worker and activist has had a remarkable year fundraising for LGBTQ+ young Black people, with her Exist Loudly Fund raising more than £110,000 over the summer.

This money has been spent to provide workshops for Black LGBTQ+ youth and as well as being split with other organisations that support the most vulnerable and marginalised in our community.

“We gave £58,000 to Colour Youth Network, Gendered Intelligence and a few other places,” Tanya explains in her Amplify by GAY TIMES digital cover story. “They were all places I’ve worked with and they specifically created spaces for Black and POC young people.

“It was imperative for me to share it with other organisations who have already been doing the work longer than I have and pay homage to them by making a collaborative community. We’re all working towards helping solve a social issue, but if you’re in competition with each other, you’re not going to solve anything.”

Tanya is hoping to do her annual Queer Black Christmas event again this year, albeit it may not be the big physical get together that it was in 2019.

“Queer Black Christmas was my baby! We started it last year and it was one of the first crowdfunding things I did,” she says.

“It brought together 30 queer Black young people from across the UK for a day of Christmas celebration where we prioritise those who are experiencing homelessness, those living in temporary accommodation, or those who have lived in a hostile family environment.

“We give them a space for them to exist without having to police themselves on how much of their Blackness or queerness they show, but now we’ve got to see how we’ll work around COVID-19.”

You can read our full profile piece with Tanya Compas here, as she covers this week’s Amplify by GAY TIMES.

GAY TIMES Honours 2020 is taking place between 25-26 November across our digital and social channels.

We are celebrating the individuals and organisations who have had a profound effect on the lives of LGBTQ+ people in the past 12 months.

Interviews with GAY TIMES Honours winners feature in the new issue of GAY TIMES Magazine, which is in stores, available online and on Apple News+ from 27 November.

GAYTIMES+ members get the new issue of GAY TIMES Magazine first, along with exclusive digital content and membership benefits. GAYTIMES+ membership is available globally, and starts at just £3.50/€4/$5 per month. Find out more here.