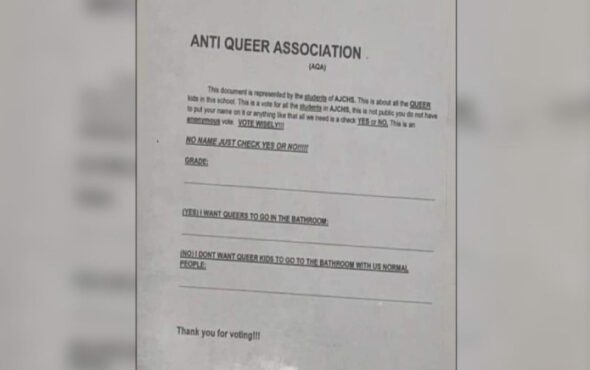 A survey was sent around a school asking students if “queers” should be allowed to use “normal people” bathrooms.

According to news outlet WPSD 6, the “Anti-Queer Association” at the Anna-Jonesboro Community High School in Anna, Illinois sent the survey around the institution.

It goes on to tell students to remain anonymous: “NO NAME JUST CHECK YES OR NO!!!!!!”

There are then two blank lines underneath each option, giving students the option to vote for what they want.

“(YES) I WANT QUEERS TO GO IN THE BATHROOM,” the first line reads, followed by, “(NO) I DON’T WANT QUEER KIDS TO GO TO THE BATHROOM WITH US NORMAL PEOPLE”.

The school’s superintendent, Rob Wright, learned about its existence on 20 October.

“We began investigating. We’re still investigating. At this point in time, I really can’t give any information regarding any individuals or discipline measures,” he explains. “But, I can tell you that this type of harassment is taken very seriously and will not be tolerated. And once the investigation is complete, the appropriate discipline will take place where warranted.”

Michael Coleman, who is on the board of directors with the Rainbow Cafe LGBTQ+ Center in the state, is furious that the paper was circulated and wants students to feel safe in education.

“My understanding is that it was an association that was brought upon the students and a parent that’s cosigning for it that made the Anti-Queer Association, basically trying to repeal the Keep Youth/Children Safe Act,” he tells WPSD 6. “Basically stating that we are supposed to have inclusive bathrooms for those who are transgender or non-binary or non-conforming.” The Act mentioned by Coleman refers to a law enforced in August 2021 which requires the teaching of sexual health education and a more LGBTQ-inclusive curriculum across Illinois.

“They really feel very unsafe in that environment in Anna-Jonesboro and that they felt that nothing was going to get done,” Coleman shares after speaking to students.

Rainbow Cafe LGBTQ+ Center took to social media to share a post informing the community that they are there to support them.

He adds: “Come to Rainbow Cafe. We offer a plethora of resources and training.

“I’m actually the one that does all of the training for different local agencies, schools. We do training on an individual basis as well, so you know, I like to tell people: If you don’t know something, learn it. Don’t spew hate about it because you don’t understand something.”

The Equitable Restrooms Act was passed by Illinois in 2019 and requires the state’s single-occupancy bathrooms to be gender-neutral from 2020.

In a bid to improve life for LGBTQ+ students at Anna-Jonesboro Community High School, Coleman invites those in the “Anti-Queer Association” to visit the Rainbow Cafe.

“I like to tell people: If you don’t know something, learn it. Don’t spew hate about it because you don’t understand something,” he says.

There will be a virtual Safe Zone and Allyship Seminar held by the group on 3 November.