Students protest against school who ‘suspended bisexual teacher for coming out’ 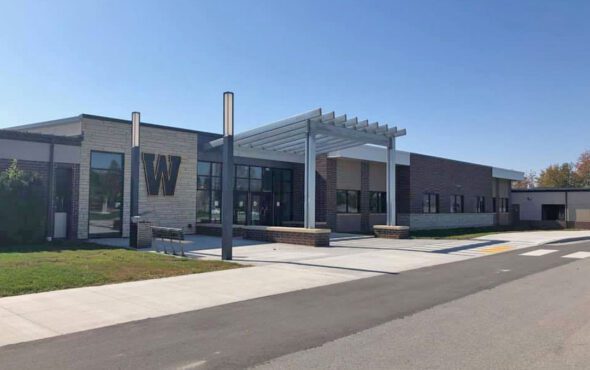 Around 100 students walked out of school in support of a teacher who was allegedly placed on leave for coming out to students as bisexual.

At the start of the school year, literature teacher Lucas Kaufmann included a “Things that describe me” slide on an introductory presentation to students.

A student questioned why a rainbow flag was featured in the presentation, to which the teacher responded that he is bisexual.

This enraged some parents at Winterset High School in Iowa, with Jacob Hall, who runs the local anti-LGBTQ+ website, Iowa Standard, writing a blog post attacking the teacher.

He claimed that a number of parents said the presentation “wasn’t appropriate for the classroom setting”.

Hall also alleged that he had spoken to Superintendent Justin Gross, who apparently said that the district will “always welcome and appreciate the feedback of parents”.

Kaufmann was placed on leave by the school shortly after, though Superintendent Gross only said this was due to “concerns” about the teacher without elaborating further.

Despite his vagueness, students at the school are challenging the teacher’s suspension and the reasons for it.

One student, who walked out of class in protest of the teacher’s leave, explained: “It’s showing how homophobic our town is and it’s not a good reputation for our school. It’s proving that kids cannot come out without punishment.”

“When I was in junior high it would have been great to have a bisexual teacher or someone that I would feel safe talking about my sexuality with,” said Kiona Newbrough, who even launched a petition demanding justice for the teacher.

“He wanted to make sure that the LGBTQ+ students at the school know that he was a safe person to talk to and an ally for them,” the petition says. “It is absolutely unjust and downright disgusting that government officials have now made this whole situation political.”

It continues: “Government officials have been trying to use this to benefit their agenda and campaigns! They also falsely accuse him of talking about his sex life in school, which is not what he did.

“The only thing he is guilty of is trying to show his students they could have a safe person to talk to about themselves and their sexual orientation, without any form of judgment.”

The teacher is reportedly still on suspension and an outcome of the situation is yet to be announced.