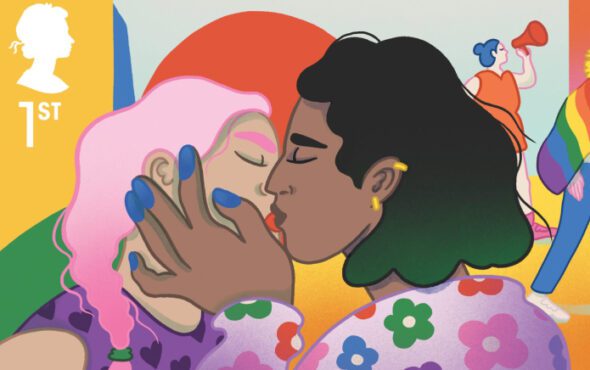 Royal Mail has unveiled a new set of Pride-themed stamps to mark the 50th anniversary of the first march in the UK.

Inspired by the inaugural protest that saw around 2,000 people march in the name of Gay Pride, the stamps depict participants marching with slogans such as, “Love Always Wins”, “Lesbians Unite” and “Glad To Be Gay!”

The eight stamps were illustrated by award-winning artist Sofie Birkin, while Royal Mail collaborated with journalist Amelia Abraham and their own internal LGBT & Friends Network to bring the project to life.

David Gold, from Royal Mail, said in a statement: “The vibrant, colourful Pride events that take place in towns and cities across the UK today trace their origins to a small number of people who marched through central London half a century ago to raise awareness of discrimination and inequality.”

Gold added: “There have been huge changes in laws and social attitudes, but Pride events continue to play a key role in raising awareness of discrimination, as well as celebrating diversity and individualism.”

The creative director of NB Studio, Alan Dye, said it was a “real honour” to be asked to design the series for Royal Mail as they “represent such an important part of British LGBTQ+ history”.

“Watching these beautiful illustrations come to life, you could easily imagine yourself as part of the ‘March Through Time’,” he continued.

The stamps will available in shops from 1 July.

The stamps celebrate the LGBTQ+ community on the 50th anniversary of the first Pride rally in London https://t.co/YdwTH1qy9S pic.twitter.com/gmrjwXFfqy

Pride in London will commemorate the 50th anniversary of 1972’s historic march by retracing its route during this year’s event.

It will commence at Hyde Park Corner and end at Whitehall Place. The route will see those participating pass historic LGBTQ+ sites in the capital, including Trafalgar Square, which was the terminus for the 1972 march.

“For fifty years, Pride has been a visible cultural protest that brings the LGBT+ community and its allies together in solidarity,” said Christopher Joell-Deshields, Executive Director of Pride in London.

“It is important to recognise the activists who were brave enough to come out in 1972 to march for our liberation and pave the way for the rights we enjoy today.

“Early organisers took inspiration from the US civil rights group, the Black Panthers, a reminder that despite their differences there was a collective fight for the oppressed.”