Reserve your usual table this Valentine’s Day with Tesco 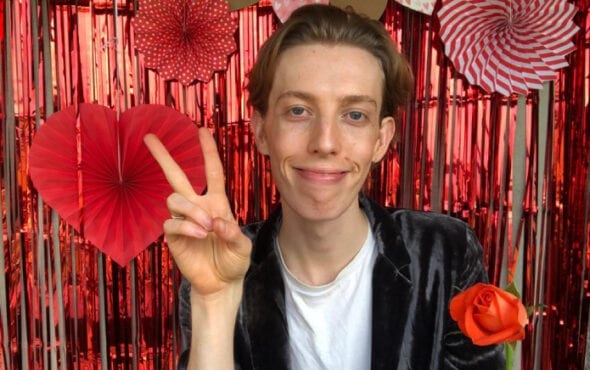 Due to the coronavirus pandemic, this Valentine’s Day will be… different, let’s just say that.

Single or taken, it’s highly likely that it will be spent in front of the telly and with plenty – we repeat, plenty – of food.

This time of year can be especially difficult for the LGBTQ+ community, as it’s just another day where queer love isn’t authentically represented in the mainstream.

So, we’ve partnered with Harry Trevaldwyn and Tesco to spread some joy this Valentine’s Day for three brilliant sketches, each of which showcase the emerging comedian’s signature style of deadpan humour.

Harry, who’s also an actor and writer, has starred in various original sketches for ITV and is known for his character-focused comedy. So far, his sketch work has received widespread acclaim; having been shortlisted for several awards.

The new clip follows the emerging LGBTQ+ comedian as an out-of-work actor who takes on dual roles as a waiter and bartender in a “restaurant”.

Harry proves to be one of the worst waiters in history (and most charismatic) as he tells a customer with a complaint that his “Tesco Finest Valentine’s Day Menu for Two” isn’t half-eaten; it’s “destructed”, and that he might’ve had a “glass too many”.

As the “shockingly beautiful” bartender, Harry informs the customer that his skills as a cocktail maker are next to none, instead offering them a glass of Tesco’s Malbec red wine. “What does it go well with? A dinner,” he says. Honestly, just book a table now.

Whether you’re single or stuck dining in lockdown with your significant other, this new comedy series is sure to remind you that romance is, in fact, not over: it has just been isolating.

Put romance back on the table. This Valentines Day, dine in with a starter, a main, some veg, a side, a dessert and a drink from our £15 Tesco Finest Menu for Two. #LoveFromTesco