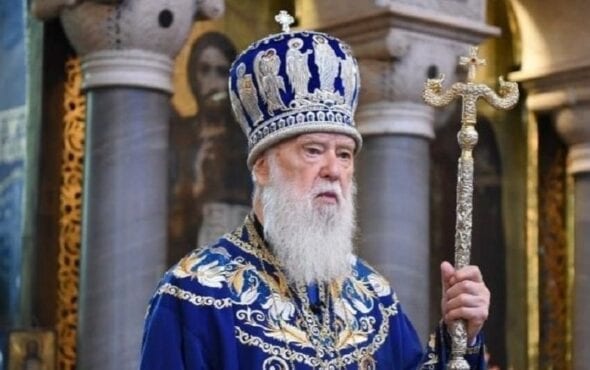 The Patriarch Filaret claimed that coronavirus was “God’s punishment” for same-sex marriage.

The Patriarch Filaret, a 91-year-old religious leader in Ukraine with over 15 million followers, is currently in a stable condition in hospital after contracting both coronavirus and pneumonia.

A statement on Facebook confirmed the Patriarch’s diagnosis. “We inform that during planned testing, His Holiness Patriarch Filaret of Kyiv and All Rus-Ukraine tested positive for Covid 19. Now His Holiness Bishop is undergoing treatment at a hospital,” it read.

Back in March, the religious leader courted a lot of controversy after he said the pandemic was “God’s punishment for the sins of men, the sinfulness of humanity. First of all, I mean same-sex marriage.”

Following his comments, Insight, a Ukrainian organisation committed to fighting for equality said they were pursuing legal action against the religious leader for fuelling hatred and discrimination. They also demanded an apology from both the Patriarch and the TV channel that aired the interview.

Defending his remarks, his press service wrote: “As the head of the church and as a man, the Patriarch has the freedom to express his views, which are based on morality.

“The Patriarchate reserved the right to bring counterclaims against those who sought to abuse judicial protections to encroach on Ukraine’s traditional family values.”

Patriarch Filaret is not the first religious leader to blame the coronavirus pandemic on the LGBTQ+ community, and let’s be honest, we’re used to it. Whenever some natural disaster, be it an earthquake, or a fire, someone always decides that somehow we’re to blame.

A DUP councillor earlier this year also blamed the outbreak on law changes surrounding abortion and same-sex marriage in Northern Ireland. “I said when abortion was legalised that our nation would be judged by God because of its departure from his word and the legalisation of the murder of the unborn child as well as same-sex marriage,” John Carson wrote.

He later apologised, sort of, in another now-deleted post: “Folks yesterday afternoon l put a post on Facebook which was taken by some and totally misinterpreted, anyone who knows me will know that l would not intentionally set out to cause hurt or offence to anyone and if l did then for that l humbly apologise.

“However l will never apologise for my Christian faith and will not be silenced by those that are opposed to the truth of God’s word.”

The World Health Organisation has called on religious leaders to stop spreading “inaccurate and harmful messages” during the pandemic, and said that religious leaders could play “a pivotal role” in order to “deliver solutions to not only address the pandemic, but to recover better (and) promote non-violence and reject xenophobia, racism and all forms of intolerance.”