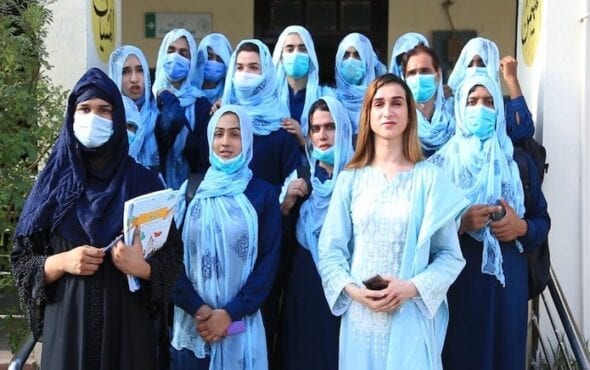 Pakistan has opened its first state institution for transgender students and has plans to open many more in the future.

On July 9, the central city of Multan opened its door to a brighter educational setting and welcomed over 15 enrolled students into a newly launched government-funded school.

The school was established by Pakistan’s educational department in Punjab province, according to Alternative Press.

“First Day of School for Transgenders by School Education Department Punjab. We have provided them everything that is required for Schooling. Dr Aithesham Secretary School South Punjab and his team have done a great job. TransEducation is the program,” tweeted Punjab Education Minister Murad Raas.

“Excellent step. Inclusive education is the key for them to secure a reasonable/decent paid work. Way to go!” Khan tweeted.

“We are grateful to the government for opening this school and for providing free education to our community,” said Ayesha Mughal, a transgender activist who for years has campaigned for the rights of their community.

In March, Pakistan opened its first Islamic school for transgender students to teach them religious readings and new skills.

The Islamic school, which is based in Pakistan’s capital Islamabad, was set up by Rani Khan, according to Reuters.

Speaking to the news publication, Khan, 34, described the discrimination the transgender community often faces in Pakistan.

“Most families do not accept transgender people. They throw them out of their homes. Transgender people turn to wrongdoing,” she told Reuters. “At one time, I was also one of them.”

At 13-years-old, Khan was disowned by her family and forced to beg to earn money.

Once older, aged 17, she was able to join a transgender group which involved performing at venues such as dancing at weddings or other celebratory functions.

Khan later left the group to reconnect with her religion to help support the local community and reach out to other transgender people.

In October, the 34-year-old opened a small madrasa to the transgender community. “I’m teaching the Qur’an to please God, to make my life here and in the hereafter,” she said explaining why she chose to open the school.

While mosques and madrasas are central locations for prayer, education, and worship, there is little recognition of the LGBTQ+ community in Pakistan.

Currently, across Pakistan, same-sex marriage or relations are criminalised under the Penal Code 1860 and are deemed culturally taboo.

Khan’s religious school is a self-funded project which receives no governmental backing to stay open.

“I’m hopeful that if you replicate this model in other cities, things will improve,” he told the publication.

“It gives my heart peace when I read the Qur’an,” a madrasa student, Simran Khan, told Reuters and added learning at school was “much better than a life full of insults”.