Newspaper publishes ‘how to spot a gay’ checklist 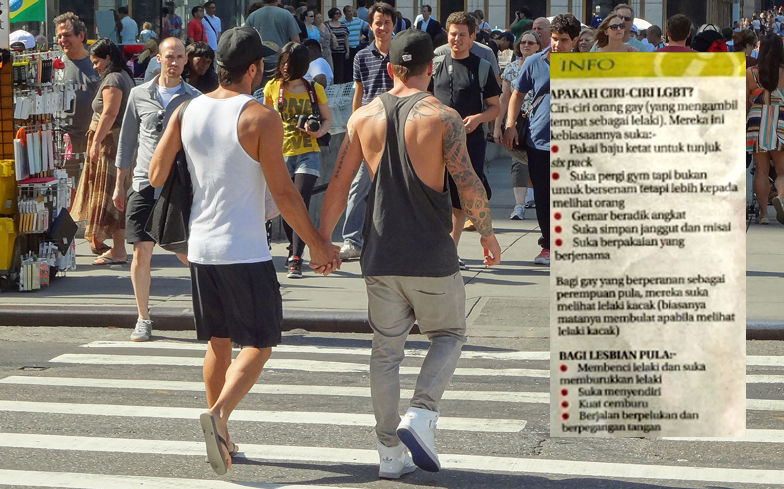 A major Malaysian newspaper has published a list of ‘tips’ to identify gay men and women.

According to the article, which appeared in leading outlet Sinar Harian, gay men can be identified through their love of beards, going to the gym to check out other men, and wearing tight-fitting branded clothing.

The article also claims that gay men’s eyes ‘light up’ when they see handsome men, according to The Guardian.

When it comes to lesbians, the checklist details that they can be identified because they tend to hug each other, hold hands, and belittle men.

Homosexuality is illegal in Malaysia, and those found guilty of being gay can be punished with up to 20 years in prison under a colonial-era sodomy law, leading LGBTQ cmpaigners to condemn the harmful checklist.

Arwind Kumar, an activist and one of the country’s biggest social media stars, called out the newspaper in a YouTube video where he said the checklist could “take away lives” by encouraging witch hunts of gay people.

“There are much more important issues in this country which need to be addressed,” he explained.

“If you really want to educate society then explain to them the traits of a pedophile, a molester, a murderer, a kidnapper, people who actually endanger the lives of others. How the hell does a gay person endanger your life?”

He also pointed out the hypocrisy of the checklist, adding: “I know a lot of priests and really religious people who love keeping beards. Are you trying to say the they’re gay? That’s how stupid this is.”

Last year, the Malaysian government was condemned for launching a competition offering $1,000 to the young person who could create the best video attempting to ‘prevent’ homosexuality in their peers.

The competition, which was open for 13 to 24-year-olds, was posted on the health ministry’s website and encouraged videos to tackle ‘gender confusion’ and the consequences of leading a homosexual life.