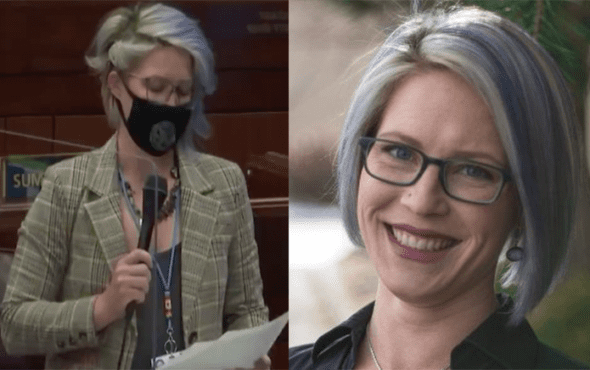 During her speech, the assemblywoman revealed Nevada has made “unprecedented progress in being a more equitable home for our lesbian, gay, bisexual, transgender and queer community.”

The assemblywoman summarised how Nevada was recognised as the best US state for the LGBTQ+ community to live in, according to USA Today.

Adding: “Yesterday, this body passed the Equal Rights Amendment that if passed by voters would enshrine in our state’s constitution equal rights for all Nevadans.”

However, while the lawmaker championed progress, she used her time on the floor to address on-going barriers, specifically discrimination “based on their orientation or gender identity in daily life.”

Access to healthcare and fair treatment was a priority in Peters’ speech. The assemblywoman highlighted a student conducted by the Center for American Progress which found that “LGBTQ+ individuals were twice as likely to be uninsured as due to concerns of how they are treated.”

Closing her speech, Peters’ applauded theDepartment of Health and Human Services for their support of the LGBTQ+ community and praised Nevada for being one of the first states to begin collecting sexual orientation and gender identity data in response to the COVID-19 outbreak.

The lawmaker added: “Today as a pansexual, cis-gendered woman I stand out for equity and remind us to be inclusive in our LGBTQ plus community, while we work to make Nevada a more equitable place for all thank you.”

Assembly Democrats posted Sarah Peters’ powerful speech on Twitter and praised the lawmaker for her “courage and advocacy for [the] LGBTQ+ community.”

You can watch Peters’ full speech below.

Today, Assemblywoman Sarah Peters @VoteSarahPeters came out as pansexual during LGBTQ+ Health Awareness Week. We are incredibly proud of her courage and advocacy for #LGBTQ+ community! #OutForEquity

Following the speech, Peters took to Twitter and opened up further about her sexuality and her vulnerability with labels.

“Being celebrated for my queerness is weird,” the assemblywoman tweeted. “Being bisexual and pansexual comes with so much guilt and questioning. Am I queer enough? Am I gay enough? What if I end up heteronormative, am I straight? Y’all, we are all enough and worth celebrating!”

Hi. Being celebrated for my queerness is weird. Being bisexual and pansexual comes with so much guilt and questioning. Am I queer enough? Am I gay enough? What if I end up heteronormative, am I straight? Y'all, we are all enough and worth celebrating! 🏳️‍🌈 https://t.co/xIjUnFQJxv

The Silver State has now become the first state in the US to protect LGBTQ+ marriages under constitutional law.

The decision was made after two-thirds of voters in Nevada fought to remove the controversial marriage provision.

The ballot in question, states: “This ballot measure would remove an existing provision in the Nevada Constitution which provides that only a marriage between a male person and a female person may be recognized and given effect in Nevada.”

The director of Nevada’s Human Rights Campaign, Briana Escamilla expressed her excitement, stating: “This overwhelming majority should be a reminder that LGBTQ equality is not just the right thing to do, it is exactly what Nevadans want.”

“Nevada has led the way in the nation on LGBTQ+ protections, and yesterday’s passage of Ballot Question 2 is yet another big step forward and important protection now afforded LGBTQ+ Nevadans,” he said.