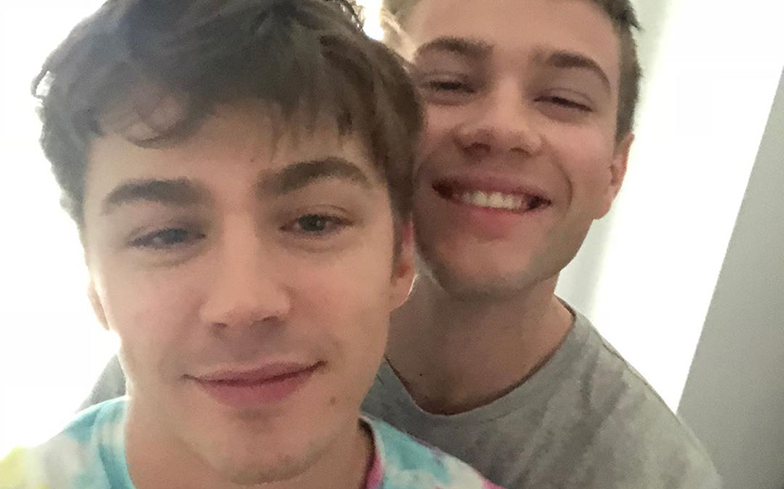 Connor Jessup and Miles Heizer have made their relationship official.

On his Instagram page, Jessup – who currently stars as the lead character in Netflix’s brand new supernatural horror series, Locke and Key – posted an adorable photo with Heizer to celebrate Valentine’s Day.

“I’m late but I love you, you’re good, you make me better, happy v+1 day,” he wrote. The caption was met with support from many stars including Heizer’s 13 Reasons Why co-star Tommy Dorfman, Adore Delano and Jane Levy.

Jessup, who is also famous for roles in TV shows American Crime and Falling Skies, opened up about his sexuality for the first time last year, explaining that he’s been out privately for a while but now wanted to share it with the world.

“I knew I was gay when I was thirteen, but I hid it for years,” he wrote.

“I folded it and slipped it under the rest of my emotional clutter. Not worth the hassle. No one will care anyway. If I can just keep making it smaller, smaller, smaller…. My shame took the form of a shrug, but it was shame.

“I’m a white, cis man from an upper-middle class liberal family. Acceptance was never a question. But still, suspended in all this privilege, I balked. It took me years. It’s ongoing. I’m saying this now because I have conspicuously not said it before.”

Jessup also addressed the gay roles he’s previously played, including Oscar in 2015 drama Closet Monster, and said he now finds it “embarrassing” that he used to talk about them as though they were separate from his own identity.

“Most painfully, I’ve talked about the gay characters I’ve played from a neutral, almost anthropological distance, as if they were separate from me. These evasions are bizarre and embarrassing to me now, but at the time they were natural,” he added.

“Discretion was default, and it seemed benign. It would be presumptuous to assume anyone would care, yeah? And anyway, why should I have to say anything? What right do strangers have to the intimate details of my life?

“I’m grateful to be gay. Queerness is a solution. It’s a promise against cliche and solipsism and blandness; it’s a tilted head and an open window. I value more everyday the people, movies, books, and music that open me to it.

“If you’re gay, bi, trans, two-spirit or questioning, if you’re confused, if you’re in pain or you feel you’re alone, if you aren’t or you don’t: You make the world more surprising and bearable. To all the queers, deviants, misfits, and lovers in my life: I love you.”

Locke and Key premiered on the streaming service earlier this month to positive reviews.

There, they discover a number of mysterious keys that can be used to unlock various doors in magical ways.

Heizer recently reprised his role as Alex Standell in the third season of 13 Reasons Why and is expected to do so for the show’s fourth – and final – season, which will premiere later this year on Netflix.

Locke and Key and 13 Reasons Why are both available to stream on Netflix.

Related: 42 of the best LGBTQ shows you can watch right now on Netflix.