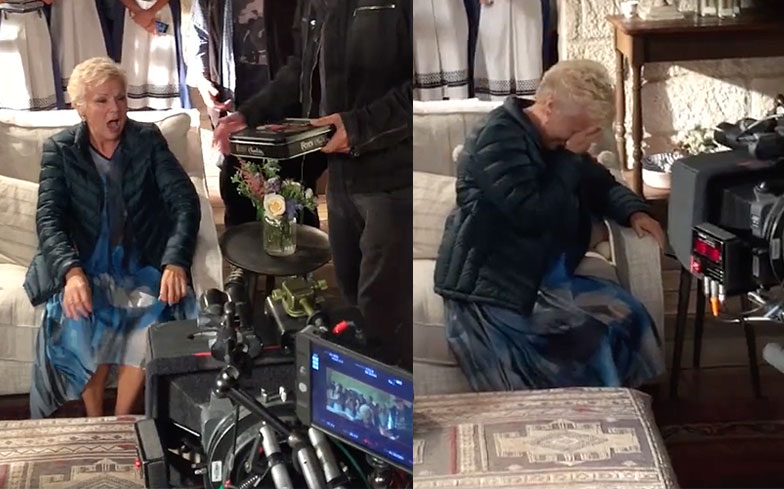 Singing the main chorus to There’s Nothing Like a Dame from musical South Pacific, an ensemble of singers interrupted filming to congratulate Dame Julie on being named Dame Commander by The Queen.

Flanked by co-stars Christine Baranski and Amanda Seyfried, the honouree cheered along with the song before making a joke about ‘ordering’ everyone to do as she says.

It was followed by a cute gift of her Damehood and a supporting clapperboard on set was labelled with ‘congratulations’.

“OMG, I’m so excited,” Dame Julie said when receiving her humorous cast gift. “I’m going to be so bossy today. I command you all…”

Related: This is who Cher will play in Mamma Mia 2, and it’s amazing!

Dame Julie was presented with her accolade by Her Majesty The Queen at Buckingham Palace earlier this week.

Buckingham Palace released the below photograph of the Acorn Antiques star receiving her accolade at The Palace.

They tweeted a caption alongside, reading: “Congratulations Dame Julie Walters! Today at Buckingham Palace The Queen awarded actress Julie Walters a Damehood for services to drama.”

She will take the role of Donna’s mother, according to the New York Post – Meryl Streep famously playing Donna in the original Mamma Mia! movie. Cher’s expected to feature in flashback sequences in the film.

Cher recently confirmed she’s recorded her song for the movie alongside sharing a first look at her fabulous costume.

Just finished Song🎂
Think Benny will Like it.
Think Ol will Love it
Think ML will laugh & Dance around with me👻👻

Mamma Mia: Here We Go Again will be written and directed by Ol Parker of The Best Exotic Marigold Hotel success.