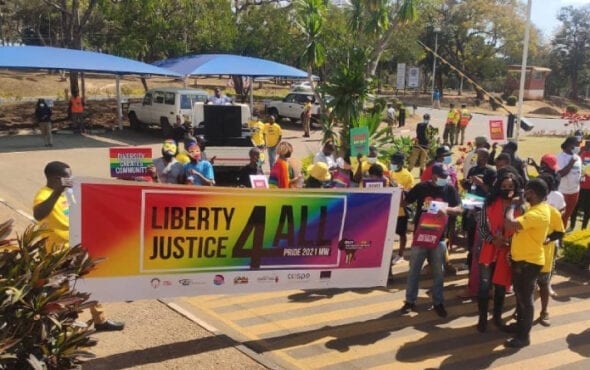 On the streets of Lilongwe, the capital of Malawi, roughly 50 members of the LGBTQ+ community marched with rainbow-coloured flags, t-shirts and and signs as they chanted “Viva LGBTI”. T-shirts donned phrases such as “love first”, “embracing our queerness” and “pride unites world”.

Due to the lack of progress for LGBTQ+ rights in Malawi, marchers wore masks to protect their identities. Organisers also used the opportunity to deliver a petition to President Lazarus Chakwera calling on the government to repeal laws that criminalise same-sex unions.

“The community is here to seek dialogue with the government and address issues affecting us,” said Eric Sambisa, co-founder and director of the Nyasa Rainbow Alliance, who also made history as the first Malawian to come out as gay on national television.

“The government says it’s implementing policies that represent people, but why should they ignore us?”

Homosexuality is still criminalised in Malawi, and non-heterosexual citizens face arrest and imprisonment. If caught engaging in same-sex activity, men face 14 years imprisonment and five for women. In 2012, however, President Joyce Banda suspended all laws that criminalised homosexuality.

The current Justice Minister, Titus Mvalo, confirmed the laws have remained in place but that the Malawi Human Rights Commission would undertake a study on the possible legalisation of same-sex marriages.

In November 2020, Malawi presented their report on human rights to the Universal Periodic Review (UPR), where they were questioned by several countries on whether their legislation would be updated to fully recognise LGBTQ+ people.

“What efforts does the government undertake to promote acceptance of LGBTI persons within society?” asked a representative from Germany.

A representative from the United States asked a similar question, stating: “Will Malawi take steps to decriminalize LGBTI status and conduct?”

Marchers from Malawi Pride spoke to The Guardian and explained why the parade was so important for their community. Andreas, 29, said: “I feel so happy to be part of this. To be a gay in Malawi is tough and it takes a lot of guts to be open like I am.

“I have been through a lot, including insults and discrimination. I’m lucky that I have a loving family which accepted me the way I am.”

Chrispine, 30, revealed that he was kicked out of his family home for his sexuality.

“It was hard for me because no one wanted to associate with me. I was really depressed,” he said. “Even in the political space I am not represented and am not allowed to have my say. I think this is historic and the moment we have been longing for. I know in the past we would not be able to do this.”

Martha Chijoz, who represented the Malawi Human Rights Commission at the parade, added: “We know there are so many misconceptions about the LGBTI community. They are human beings and deserve rights like any other person. The community suffer a lot of discrimination that’s why we have a specific focus on raising awareness.”

First gay parade in Lilongwe. We will monitor the parade. pic.twitter.com/zn8kNfoce0